South Africa’s history and legacy compels it to do more when it comes to human rights on the Continent of Africa! To speak out and to offer a diplomacy of insistence. Most countries in Africa have suffered the oppression and ills metered out by Colonizers. It is a long history. It is a large continent.  South Africa itself has done its time as – in Mandela parlance – “the skunk of the world,” and while he vowed “never again” for South Africa, he surely imagined a better world, a better Africa.

There is much fixing to be done for freedoms on the continent – especially where LGBTQI people are victimized as abomination and journalists are scourged as threats to leaders.  The latter, enjoying a new notch, so kindly delivered by a U.S. President – who’s impetus on this globe cannot go unnoticed. But that is another whole article.  Though I cannot fail to notice the alignment, so significantly suggested by South African Angela Quintal, when describing her ordeal “My Nasty Encounter with Tanzanian Repression” after being detained with her Kenyan colleague Muthoki Mumo , both journalists turned press freedom advocates for the New York-based Committee to Protect Journalists. She noted: “US President Donald Trump was berating CNN White House correspondent Jim Acosta on cable news when I heard a knock on my hotel room door. I opened it to find the hotel manager flanked by several men and women in plain clothes. They were there for a regular immigration check, she said.”

Quintal delivers her terrifying experience in that article, notes how she felt rescued by social media support and the South African government and then BAM BAM BAM -– let down – with THIS her concluding paragraph:  “The South Africans were superb and even escorted us to the airport and waited until we were safely on the flight to OR Tambo International. So on Monday, when Minister Lindiwe Sisulu ignored what we had told the SA High Commission and accepted Tanzania’s false justification that we had been detained for working with tourist visas, I was outraged. I took it more personally than the government-aligned Tanzanite newspaper’s ludicrous attempts to discredit us with a false and defamatory cover story branding us as spies.”

That is absolutely unacceptable on the part of the SA government or any of its representatives and it is now more incumbent upon them than ever to search deeply into the soul of their Constitution and the blood that came with it, to lead a wake for Africa to embrace all freedoms:

None of which is less important than the other and one of which remains dormant and obscure – LGBTQI rights and freedoms.   South Africa is the only country on the continent of Africa that has a constitution which expressly includes sexual orientation and gender identity in its Constitution, the only country where same-sex marriage equality has now been enshrined through the legal system.

What has South Africa, a country which must surely believe in its Constitution, done by way of leadership on the continent where 34 out of 54 countries outlaw homosexuality through antiquated Colonial penal codes or more recent anti-homosexuality legislation? Not very much: 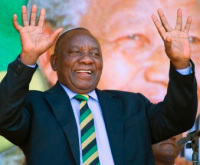 In fact new President Cyril Ramaphosa inherited an embarrassingly deflated sense of responsibility, perhaps even a destructive course,  from his ANC party predecessor, former president Jacob Zuma, who essentially can be called out for propping up Uganda’s Anti-Homosexuality Act of 2014, dubbed “The Kill the Gays Bill” and the milieu that went with it, by South Africa’s choice of ambassador to Uganda, Jon Qwelane, who stood to be  convicted at that very time in the South African Courts for his verbal assault on homosexuality and the South African LGBTQI community.  This insidious irresponsible choice defiled South Africa’s commitment to human rights: It was failed leadership, with a slap in the face to all South Africans, let alone the LGBTQI community.

Where was South Africa’s leadership when Nigeria passed the Same Sex Marriage (Prohibition) Act, 2013 (SSMPA), again with Zuma at the helm?  Nowhere to be found!

When elected South Africa’s LGBTQI community joined the rest of the globe in celebrating the election of President Cyril Ramaphosa, who had been a long been a champion of LGBTQ+ rights in the country and the continent. He must show his strength and assert critical leadership before he misses this opportunity, as Tanzania provides a new opportunity for redemption for South Africa where it can take its leadership responsibility seriously and apply swift action to the current wave of repression. This is the time where President Ramaphosa will be tested – as to whether his support for LGBTQ AFRICA is mere lip service? South Africa has the promise of this new president who must show leadership, despite the disappointment engendered through the actions, words and silence of his predecessor.

Just this week Johannesburg Pride took a bold stand and sent this letter, below, to South African President Cyril Ramaphosa calling on him to show leadership on the Continent, with the request to specifically condemn the spate of persecution against LGBTQ+ Tanzanians, also noting the flagrant abuse to LGBTQ+asylum seekers and refugees that occurred at the hands of Parliamentary delegates from African countries at the Legislators meeting in Geneva of the Inter Parliamentary Union (IPU), where a majority voted to ban debate on the subject of LGBT human rights – as some nations sought to bring the subject to the floor, in the hope of passing an amendment to include LGBT people in a declaration on migrants and refugees.

African Human rights Coalition vehemently condemns the hateful sentiment being expressed by political leaders, the arrests and all threats to the safety and human rights of people who are either LGBTQI or perceived as such on Zanzibar and in Tanzania.

Leaders should not use the draconian laws delivered by the Colonizers to persecute people whose only ‘crime’ has been to love someone of the same gender or to express their authentic gender identity.

To use myth and lies about any minority to further one’s popularity or as a political tool is not only insidious but also a sign of weak and ineffective leadership. Instead true leaders should follow in the footsteps of the iconic courageous leader, former South African President Nelson Mandela, who truly understood the ills of colonization and who refused to allow its historic persecution of gays to continue to subvert true African culture.

As the colonizer still attempts to export hate to Africa, we must divert and rise above it, to courageously expedite the decriminalization of people’s sexuality. On this issue we must deliver Africa from the clutches of the colonialists and restore Africa’s culture to pre-colonial times, using autonomy to embrace hope for the future.

South Africa it is about time leadership come out with a vehement statement and follow up diplomacy. And it is time for South Africa’s LGBTQ+ community itself to stand behind Jo’Burg Pride –  it is about much more than a parade, a dance and beer – it is about our world – our continent –  it is about all of our lives!  Its time to decriminalize homosexuality everywhere. There must be a collective voice and it must be loud and clear.  When you fight for those beyond your own borders, in essence you are fighting for yourselves. Now is the time to put pressure on President Ramaphosa to stand up for freedom of the press and freedom sexuality and gender identity for the entire continent of Africa.

It is time to call for a Presidential Advisory Council/ Leadership Council on LGBTQ+ Africa– to create strategy and develop diplomacy to fight for the decriminalization of homosexuality on the Continent of Africa.

Please share – Work it! Get it done. You have a duty!

My e-mail commissionermnathan@gmail.com
Support our work at African Human Rights Coalition
Check out my shenanigans on Facebook
Follow me on Twitter – @MelanieNathan1
Where I have been blocked by Donald J. Trump
Check out my Instagram: Commissionermelnathan
@AfricanHRC

If we fail to embrace intersectionality we may as well pile the pieces of the puzzle on top of each other instead of attaching them to each other for the sake of completing the puzzle!