Kanye West’s trip to Uganda has been excruciatingly tone deaf. Not only did he hand out oversized shoes to orphans and relish photo-ops with one of Africa’s longest-serving oppressive autocratic rulers, but the rapper also seemed willing to turn his back on fellow rapper Bobi Wine, as well as the socio-economic issues facing his fans on the continent, all in exchange for a typically selfish motive:  Kanye asserted that his trip to Uganda would help him finish, and perfect, his long-awaited album.

This Kanye West publicity stunt may be perceived as good for Uganda, but when it comes to West’s career, he has ignorantly alienated his African fan base and inserted this final nail in his U.S. rapper career too – unless of course he can come up with some rap beat and narrative which those Trump supporting MAGAs can relate to.

West, his wife Kim Kardashian, their eldest daughter North and an entourage schlepped through Uganda’s tourist attractions.  They visited with President Yoweri Museveni, notorious for 30 years of violent persecution of political opponents, suppression of free elections, oppression of the press, propping up violence against LGBTI people through his support of the “Kill the Gays Bill” and his ultimate signing of the 2014 Anti-Homosexuality Act.

Museveni, in receiving the Wests and their gift of a pair of fitting sneakers, (yes his fit!) hopes having the high-profile couple in the country will help promote tourism and the arts.  Right! To who? The inbreds, the KKK, the Nazis and the MAGAs?  The white supremacists who agree with Trump that Uganda is a “shithole country”?   Certainly not to anyone with knowledge of all this!  And let us add the fact that Museveni has not been at all friendly to artists in his own country, remembering that famed Ugandan rapper turned lawmaker Bobi Wine was detained and beaten by military police.

Does Museveni really think that the American rapper now reduced to a raving ranting MAGA anomaly heralds his redemption? Does Kanye West really think that sneakers and footsie with violent autocrats prescribes perfection for his artistry? 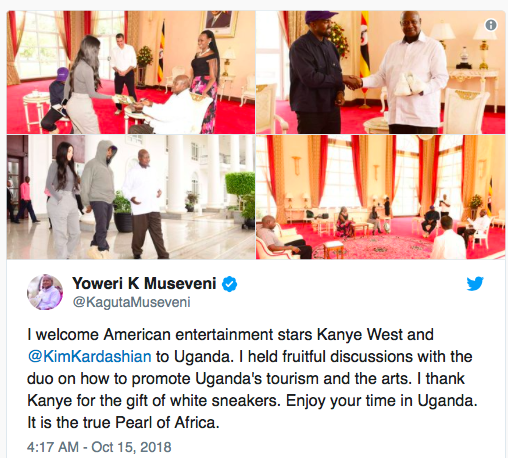 READ MORE ABOUT UGANDA AND THEIR LATEST ANTI GAY ANTICS:

At the Legislators meeting Geneva of the Inter Parliamentary Union (IPU), a majority voted a ban debate on the subject of LGBT human rights  – and according to Ugandan reports this is a forever-enduring ban. Some nations brought the subject to the floor, in the hope of passing an amendment to include LGBT people in a declaration on migrants and refugees. READ MORE

2 thoughts on “Kanye West is Tone Deaf in Uganda”