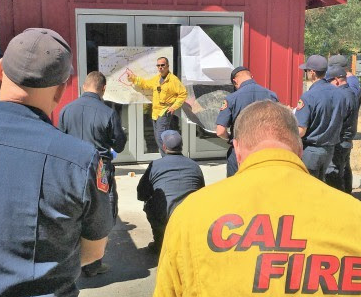 Woodacre, CA – Crews from the Marin County Fire Department and other supporting agencies continue suppression efforts for the Irving Fire, and investigators believe the cause was a downed power line.

The vegetation fire near Samuel P. Taylor State Park in Marin’s San Geronimo Valley is holding at 152.21 acres and is 80 percent contained as of 2 p.m. Wednesday, September 12. Two water tenders, five engines and four hand crews are working on the incident for a total of 83 personnel. All support aircraft were released as the fire’s forward progress has been stopped. Crews are still heavily engaged in extinguishing hotspots.

The power line in question is on the south side of Mount Barnabe toward the base of the mountain around the Ridge Trail.

Located northwest of Lagunitas on the eastern border of the state park, the Irving Fire initially was reported shortly after 7 p.m. Monday, September 10. At about 9:20 p.m., homes long three roads close to the fire were evacuated and residents were directed to a shelter at the nearby San Geronimo Community Center. Two adjacent areas were placed on an evacuation warning shortly thereafter. By 10:30 p.m., the fire had consumed 40 acres. Evacuation orders were lifted at about 5 p.m. Tuesday, and no structures were affected by the fire. In all, the fire grew to 152 acres, though no additional evacuations took place.

“This fire highlights that we’re in the worst part of fire season for the North Bay,” said Marin County Fire Chief Jason Weber. “It’s important for residents to take key safety measures to prepare for a fire such as creating defensible space around their homes, making an evacuation checklist and registering for emergency notifications through Alert Marin.”

The San Geronimo Valley is no stranger to disaster preparedness. Many residents affected by the Irving Fire evacuation order and warnings participated in a community evacuation drill July 21. The San Geronimo Valley Emergency Readiness Group (VERG), a volunteer citizen disaster preparedness group for the unincorporated communities of Lagunitas, Forest Knolls, San Geronimo and Woodacre, were instrumental in quickly establishing the evacuation shelter alongside personnel from the American Red Cross and the Salvation Army.

“Our community takes wildfire preparedness seriously, and I think their previous evacuation drills and preparation efforts made a real difference in evacuating quickly on Monday night,” said Dennis Rodoni, County Supervisor for District 4, which includes the San Geronimo Valley. “Early awareness and evacuation are key to safety in these situations, and I hope the San Geronimo Valley’s level of engagement in disaster preparedness can serve as a model to other Marin communities.”

The Marin County Office of Emergency Services uses Alert Marin to send important emergency instructions, such as evacuation orders, to residents. The system uses existing landlines for the notification, but residents can opt-in for additional notifications to cell phones, VOIP phone lines and email. Every Marin household should register at AlertMarin.org.

Keep Marin Safe! Thank you to all Fire Fighters and related personnel!