“Court’s Decision Gives a Green Light to Policy Based on Bigotry” MPOWER CHANGE. 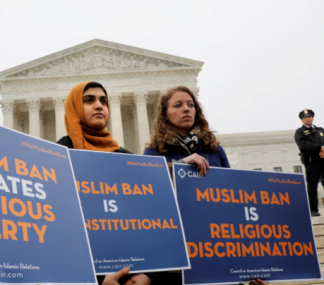 The U.S. Supreme Court, in Trump vs. State of Hawaii, upheld, (5-4)-  President Donald Trump’s travel ban restricting, an executive order that suspends refugee resettlement and permanently prohibits citizens of six Muslim-majority countries from entering the United States on the basis of their nationalities.

The court’s decision overturned a preliminary injunction and remanded the case for further proceedings. The court, however, did not address the propriety of the scope of the nationwide injunction—the U.S. Justice Department had urged the justices to check the power of trial judges to issue national injunctions.

“[T]he government has set forth a sufficient national security justification to survive rational basis review. We express no view on the soundness of the policy. We simply hold today that plaintiffs have not demonstrated a likelihood of success on the merits of their constitutional claim,” Chief Justice John Roberts Jr. wrote for the majority. (Read More)

Muslim Advocates is co-hosting an action at the Supreme Court to respond to this ruling at 11:45 AM ET.:

“In affirming President Trump’s bigoted Muslim Ban, the Supreme Court has given a green light to religious discrimination and animus.  Not since key decisions on slavery, segregation in schools, and Japanese American incarceration, have we seen a decision that so clearly fails to protect those most vulnerable to government-led discrimination.  Trump may have won this round, but we are focused on the next round and will continue to fight until justice prevails and his anti-Muslim agenda is overturned for good.

Since the Muslim Ban was allowed to go into effect late last year, the administration has separated families and loved ones; and denied people opportunities to work, travel, study, seek medical care, and better our nation, simply because of what they believe and where they come from.

This decision puts the basic rights of all Americans at risk. It says that even when an administration is clearly anti-Muslim, when it targets Muslims, when it insults Muslims, and when it puts a policy in place that specifically hurts Muslims – that the Court will let it stand. If it can happen to Muslims, it can happen to anyone.

Today’s decision is deeply disappointing, but our work is far from done.  But this is just one fight in a broader battle against Trump’s anti-Muslim and anti-immigrant agenda.  We will continue to fight for the lives still imperiled by this reckless ruling. We will continue to fight in the courts, we will urge our members of Congress to serve as a meaningful check on the administration, and we will speak out online, and in our communities to declare that this Ban is a shameful betrayal of our nation’s commitment to equal protection under the law for all.”

“This ruling does not change the fact that in his campaign Donald J. Trump vowed to target Muslims, a clearly bigoted approach to border control. Such targeting, based on religion, is without merit and prejudicial to the majority of good people seeking refuge, wanting to visit family, and meaning no harm. As such the ban is immoral and no amount of rulings can change that undeniable fact.

Who could ever have imagined that religion would be the determining factor for a denial into this once welcoming country that reveres its Constitution and the First Amendment?

This decision will go down in history as a shameful reflection on a shameful time in American history.

This ban has a direct impact on LGBTQI people who seek refuge in America from deathly persecution in some of these countries. Our hearts go out to all impacted by this ban.”  Melanie Nathan, Executive Director African Human Rights Coalition.

UOPDATED: More commentary will be added:

We are profoundly disappointed by the Supreme Court’s ruling in favor of the administration’s ban on entry into the United States of entire classes of individuals solely based on where they were born. This decision will damage the nation’s public institutions by restricting the free movement of qualified individuals. Worse yet, it undermines America’s global standing as a beacon of openness and freedom to all people.

The American Association of State Colleges and Universities (AASCU) is a Washington, D.C.-based higher education association of more than 400 public colleges, universities, and systems whose members share a learning- and teaching-centered culture, a historic commitment to underserved student populations, and a dedication to research and creativity that advances their regions’ economic progress and cultural development. These are institutions Delivering America’s Promise of Opportunities for All.

Background information regarding Muslim Advocates work against the Muslim Ban:

Muslim Advocates has filed eight lawsuits against the Trump administration regarding the Muslim Ban, including the first major lawsuit against Muslim Ban 3.0, Iranian Alliances Across Borders v. Trump, which resulted in a preliminary injunction against the ban.

The organization has also filed nine amicus briefs in various courts opposing the ban, multiple Freedom of Information Act requests to expose more information about how the ban was developed and is being implemented, and recently released a report analyzing the effects and implications of the ban and the great lengths that the administration has taken to circumvent the Constitution.  New Muslim Advocates- Probolsky Research polling documents the unpopularity of the Ban among voters.

New York, NY—Following the Supreme Court’s decision in Hawaii v. Trump, the case challenging the Muslim Ban, MPower Change, the New York Immigration Coalition (NYIC), and other partners will host a rally at Foley Square as part of the #NoMuslimBanEver campaign. The event will show the Court, the Trump administration and the American public that the Muslim community, in alliance with many other communities under attack by this Administration, will continue to mobilize against Trump’s radical anti-Muslim, anti-immigrant, anti-refugee, and White Nationalist agenda.

PLACE:       The rally will begin at Foley Square, New York, NY and proceed to Battery Park

WHO:          Muslim Voices from MPower Change, NYIC, and #NoMuslimBanEver Coalition

MPower Change and #NoMuslimBanEver coalition partners have organized 17 events across the nation where communities will stand in solidarity against today’s Supreme Court decision.

Visuals: Intergenerational, diverse group of people with signs, and testimonials from people who have been impacted by the Muslim Ban.

Note to press: MPower Change Executive Director, Linda Sarsour and Campaign Director, Mohammad Khan, will be available for interviews in New York to discuss how they will continue organizing Muslim and ally communities in the wake of the Supreme Court’s endorsement of the Muslim Ban.