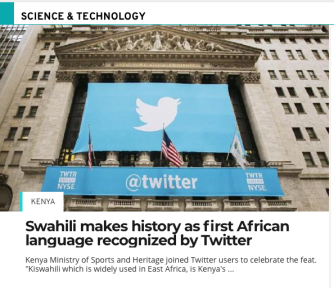 Twitter has officially recognized Swahili as a language. Well that does not mean that Twitter has yet added Swahili to language settings.

Since last week, Twitter started detecting the language in tweets and subsequently offers a close to perfect translation as with most other foreign languages.

Kenya Ministry of Sports and Heritage joined Twitter users to celebrate the feat. “Kiswahili which is widely used in East Africa, is Kenya’s national language & it unites the people of Kenya,” the tweet said in part.

Swahili, also known as Kiswahili –  the first language of the Swahili people. It is a lingua franca of the African Great Lakes region and other parts of eastern and south-eastern Africa, including Tanzania, Kenya, Uganda, Rwanda, Burundi, Mozambique, and the Democratic Republic of the Congo (DRC.)

Estimates of the total number of Swahili speakers vary widely, from 50 million to over 100 million.  Swahili serves as a national language of four nations: Tanzania, Kenya, Uganda, and the DRC. Swahili is also one of the working languages of the African Union and officially recognised as a lingua franca of the East African Community.