Public safety workers and the friends and family members of those at risk for overdose are being encouraged to carry naloxone. 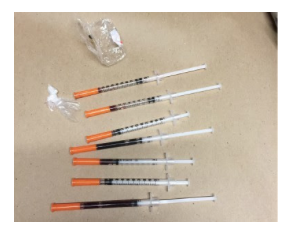 San Rafael, CA – Two probationers who have histories of being hospitalized for opiate abuse were booked into Marin County Jail following arrests that Marin County Probation Department officials said might have saved their lives.

On April 25, a team of probation officers was trying to track down a man who had skipped out of a residential substance use treatment facility for a third time. After interviewing several people in San Rafael, a probation officer learned that the probationer was observed associating with a female probationer who was being tracked with a global positioning monitor.

Through the electronic surveillance, the officer noticed unusual activity at an apartment complex on Lincoln Avenue, and four officers went to investigate. They made entry into an apartment contacted both probationers. The woman was under the influence of heroin and in possession of heroin, crack cocaine, and several hypodermic needles. Just after she was arrested, the male probationer fled on foot, pursued by officers. He was quickly apprehended after a chase of about 50 yards, found to possess eight syringes with at least two containing heroin, and admitted to using heroin. He was arrested as well.

Both probationers face drug possession charges and probation violation charges. They were being held without bail at Marin County Jail and the evidence was transferred to the Coordination of Probation Enforcement (COPE) detectives from the Marin County Sheriff’s Office.

Dr. Matt Willis, the County’s Public Health Officer, is among the co-founders of the RxSafe Marin initiative that is working toward eliminating all local accidental overdose deaths. Drug overdoses remain the leading cause of accidental death in Marin and kills more local people than vehicle crashes.

RxSafe Marin has been at the forefront of making naloxone, a medication that reverses an opioid overdose, more available countywide. Naloxone blocks the effects of opioids during an overdose and restores breathing. Public safety workers and the friends and family members of those at risk for overdose are being encouraged to carry naloxone.

“This is another example of the toll the opioid epidemic is taking,” Willis said of the two arrests. “It’s important to remember that for three out of every four heroin users, their addiction started with prescription opioids. We’re working with the jails to make sure people addicted to opioids get the services they need to regain their lives.”

Probation Chief Mike Daly said his team places public safety first. “Our officers are not only working to ensure the safety of the public at large but also the probationers who may be endangering themselves,” Daly said. “We hope these probationers will someday appreciate this and use it as a point to turn their lives around.”