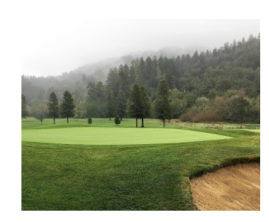 San Rafael, CA – A proposal to operate the San Geronimo Golf Course for the next two years is going before the Marin County Board of Supervisors on March 27, and approval of a contract with a golf course management company could result in a reopening of the course in April.

The Board of Supervisors approved a purchase agreement for the San Geronimo property in November 2017 with The Trust for Public Land (TPL), and TPL is maintaining ownership until the County can raise funds to complete the purchase. TPL bought the land for $8.85 million, the same price the County has agreed to pay TPL for the property. The County kept the fairways and greens in a play-ready condition the past few months in anticipation of a golf course operation agreement.

In early January, Parks released a request for proposals (RFP) to solicit an operator to continue golf and clubhouse operations for a two-year period. Proposals were received, and three potential operators were selected for interviews. Following that process, Touchstone Golf was chosen to move forward to negotiate a potential agreement.

Over the past several months, Parks staff has met with the San Geronimo Valley community and other interested Marin residents, responding to questions and listening to concerns. Public visioning workshops and other events will be scheduled as soon as this spring to discuss proposed future uses for the property. Any future uses would require consideration and approval by the Board of Supervisors and appropriate state environmental analysis.

On March 12, the California Wildlife Conservation Board staff announced its recommendation to award a $3,420,000 grant toward the County’s purchase of the San Geronimo property. If ultimately accepted by the Board of Supervisors, the money would account for 69 percent of the $4.94 million the County needs to finalize the acquisition transaction. The County seeks to finalize the purchase from TPL by late 2018.

In January 2018, the California State Coastal Conservancy approved a $150,000 grant to support a community engagement and vision planning process for future public uses of the property. Marin County Parks plans to bring that grant agreement to the Board of Supervisors for approval on March 27. Parks has also entered into an agreement with the Golden Gate National Parks Conservancy to provide staff support for the planning effort.

Melanie Nathan
My e-mail – commissionermnathan@gmail.com
Support our work at African Human Rights Coalition
Check out my shenanigans on Facebook
Follow me on Twitter – @MelanieNathan1
Check out my Instagram: Commissionermelnathan
Visit my Family Law Mediation site: Private Courts
RESIST TRUMP on FACEBOOK
Ask me to Speak: SPEAKER