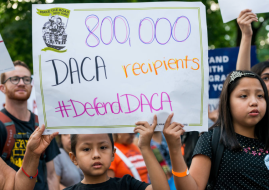 Washington, DC – On a press call today, DACA-recipients, legal experts, and advocates explained the details and implications of the preliminary injunction against the administration’s DACA-revocation and the urgent need for Congress to enact the bipartisan Dream Act by January 19th.

I was on the call today, which provided excellent commentary and answered important questions, inter alia, on the Court Action yesterday and its impact on the call to pass the DREAM ACT.

“Last night’s California federal district court decision affirms what the rest of the country already knows: that the decision to end DACA wasn’t just callous and cruel, it was unlawful. This decision was carefully worded and thorough, and it was certainly a victory for the brave DACA recipients who challenged the president in court. But this is a preliminary injunction which is temporary and DACA recipients, their families, employers, communities, and frankly the country, needs a permanent solution which only Congress can provide. We can’t wait. Every day, folks are losing their DACA, and families are being plunged into uncertainty and left at risk of deportation. Congress can have a solution to this today.”

“Don’t let anyone tell you that the urgency to get this done is not real or has changed in any way because it’s not true. The court decision and the meeting yesterday are signs of movement and momentum by officials in the government – momentum that has been built by the immigrant youth who are fighting for our lives. Immigrant youth and our families are doing our part, and we need Washington politicians to do theirs.”

“This court decision is a victory for Dreamers and for the Attorneys General working to uphold American values, and it is yet another step demonstrating the relentless nature of the Dreamer-led movement and the broad public support for a resolution for this issue. However, the issue is not going to go away until we resolve it once and for all. Courts are saying it. People in both parties are saying it. The public is saying it. It is time to pass the Dream Act, and we are increasingly optimistic that we will in fact get there in the coming days.”

A recording of today’s call is available here

+++
Folks, do not let up – All Americans must reach out even if you believe this does not personally impact you. Donald Trump initiated this crisis and now wants to take credit as its savior – the latter is fine as far as I am concerned, as long as we get it done. The momentum is here and its time to reach out to your representatives again and again –  Hold your representatives feet to the fire.  Trump’s irrational behavior will keep DACA in crisis until a new Dream Act is signed. Push for it – NOW!
+++