… even though for reasons having little to do with his homophobia – but at least there is hope for a future administration that would now be more likely to embrace equality like its neighboring South Africa” Melanie Nathan, African HRC.

Like many Africans I am so happy to see Zimbabwe President Robert Mugabe ditched by his own!  He is OUT!  And its about “blady” time! The notorious virulently homophobic despot has held a tight ‘reign’ (and rein) over Zimbabwe for decades, and now will have well earned the embarrassment of a coup that comes along with refusing to abide democracy.

Robert Gabriel Mugabe is a Zimbabwean revolutionary and politician who has served as the President of Zimbabwe since 1987. He previously led Zimbabwe as Prime Minister from 1980 to 1987. Despite his outrageous anti homosexuality remarks, and his extremely unhealthy stance against LGBTI people,  he was recently named Goodwill Ambassador for the World Health Organization – hopefully he will be “COUPED  OUT” of that title too!

When tanks were seen rolling into Harare – rumor soured and no one, neither local journalists, BBC, CNN, Reuters could get a clear handle on what was going on.  Some said he was out, under house arrest, and others reported he is holding on regardless of the fact that Zimbabweans have taken to the streets celebrating his “fall from Grace!” His wife, Grace,  was dubbed to take over from the ailing despot. Zimbabweans are having none of it!

All the while Mugabe purports to hold on.

Read the latest from BBC:

“Zimbabwe’s embattled leader Robert Mugabe has vowed to stay in power for several weeks, despite intense pressure on him to stand down now.

In a live TV address, Mr Mugabe said he would preside over the ruling party’s congress in December.

The Zanu-PF earlier sacked him as party leader, and gave him less than 24 hours to resign as president or be impeached.

His grip on power has weakened since the military intervened on Wednesday, in a row over who should succeed him.

The crisis began when the 93-year-old president sacked his deputy, Emmerson Mnangagwa, two weeks ago, angering army commanders who saw it as an attempt to position his wife as his successor.”

And as it unfolded earlier: HERE

“We are hoping for a peaceful transition to a government that works for the people of Zimbabwe, to restore it to its fullest potential, where human rights and the wellbeing of all are put at the fore.

For years Robert Mugabe has been known for fueling homophobic sentiment in the country, by berating gay people and defending anti-LGBT laws. He has made snide remarks indicative of his support for the death for gays. His homophobic stance and actions can be blamed for the ever worsening HIV crisis in Zimbabwe.

At African HRC we are happy that Zimbabweans are supporting the coup against homophobe Mugabe, even though for reasons that probably having little to do with his homophobia and certainly much to do with many human rights infractions in general, including a failed democracy.  At least there is now hope for a future administration that would be more likely to embrace equality like its neighboring South Africa.”    Melanie Nathan, African HRC. 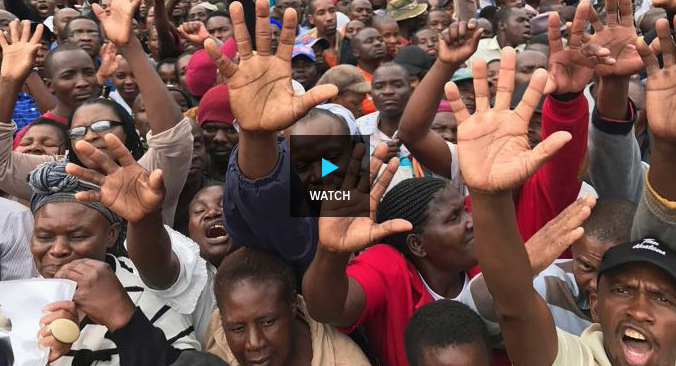 Harare, Zimbabwe (CNN)A deadline set by the party of Robert Mugabe to resign as the country’s President has passed without a public statement, as speculation swirls over the veteran leader’s next move.

A source with knowledge of negotiations over Mugabe’s future told CNN that the President had agreed to terms for his exit and that a letter had been drafted.
But the 93-year-old leader has defied all expectations in the past week of political turmoil and efforts to end his 37-year rule appear to still be in a state of flux. Mugabe stunned the nation on Sunday night by making a rambling televised statement that unexpectedly ended without his resignation.
Mugabe’s ZANU-PF party, which he co-founded and led for decades, ousted him as party leader on Sunday and gave him an ultimatum — relinquish the presidency by midday on Monday or face an impeachment vote in Parliament. READ MORE