“MCC called it “restructuring.” But that usually means shifting people around, not eliminating them without warning or seeking possible alternatives. Instead, Darlene was told “goodbye” with no warning, no severance, and no unemployment compensation from MCC.” Robin Tyler 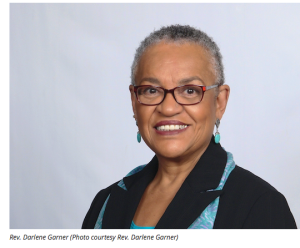 An article by Robin Tyler that appears in The Los Angeles Blade notes:

I am shocked and I am not easily shocked! Too many powerful, competent women have been attacked and vilified.

The best example, of course, is Hillary Clinton. As qualified as she was to be President of the United States, she was considered “pushy,” suspicious, untruthful, and other derogatory adjectives heaped upon brilliant, successful women by men and some women.

Another example is attorney Gloria Allred. She is admired as much as she is vilified. But men are never accused of wanting or getting ‘too much publicity.’

Then there’s Jill Abramson, the first female executive editor of The New York Times. She was fired after complaining that her salary and benefits were considerably less than the male editor she replaced.

So I know of the struggle that competent women face.

But when I heard that after 41 years of working at Metropolitan Community Churches (MCC), my good friend Rev. Elder Darlene Garner had been “fired” on her birthday, I felt stunned and shocked.

MCC called it “restructuring.” But that usually means shifting people around, not eliminating them without warning or seeking possible alternatives. Instead, Darlene was told “goodbye” with no warning, no severance, and no unemployment compensation from MCC.

This LGBT church says their Core Values are “Inclusion (love is our greatest moral value), Community, Spiritual Transformation, and Justice (standing with those who suffer under the weight of oppressive systems, being guided always by our commitment to Global Human Rights).”

Excuse me? Discarding a 69 year-old African-American lesbian like yesterday’s trash is justice? Of course, they wanted her to sign a non-disclosure agreement and since she has been the first and only black person as part of the MCC Senior Staff since 1999, I’m sure they are rushing to find African Americans (sic)  to hire on staff and put on the board so they don’t look bad. Too late.

But why was Darlene fired? At the MCC General Conference in Vancouver last year, Darlene came in second when they voted for Moderator, the top position in the organization. She’s popular and has paid her dues.

Darlene joined MCC in 1976. She has been pastor of churches in Baltimore, Maryland, and Fairfax, Virginia, in the United States and in Cape Town, Western Cape in South Africa. First recognized as an MCC spiritual leader in 1993, she was serving as the Convener of the MCC Conference for People of African Descent and as Director of the MCC Office of Emerging Ministries when she was dismissed.

READ MORE on the BLADE HERE