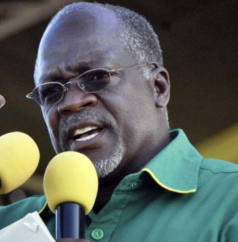 Police in Zanzibar are reporting that 20 people have been arrested in the Tanzania semi-autonomous archipelago of Zanzibar in an anti-homosexuality raid.

The 12 women and eight men were picked up in a hotel where they were receiving training about HIV/Aids education programs.

Regional police commander Hassan Ali Nasri boated proudly on state television: “They are implicated in homosexuality. We arrested them and are busy interrogating them. The police cannot turn a blind eye to this practice.”

On Friday, Deputy Health Minister Hamisi Kingwangalla vowed in front of parliament to “fight with all our strength against groups supporting homosexuality in our country,” AFP news agency reports.

In July 2016, the government banned the import and sales of sexual lubricants, with Health Minister Ummy Mwalimu saying it encouraged homosexuality which led to the spread of HIV/Aids, AFP adds.

Homosexuality is illegal in 38 of 54 countries in Africa, and is punishable by death in Mauritania, Sudan, Nigeria and Somalia.  In recent years with the help of American Evangelical preachers, politicians in various African countries have upped the anti-gay rhetoric, seeing it was unifying and politically expedient. This has led to increased legislations and attempt to legislate against homosexuality with more onerous, expanded and harsh punitive laws.

According to the 2007 Pew Global Attitudes Project, 95 percent of Tanzanian residents believe that homosexuality is a way of life that society should not accept, which was the seventh-highest rate of non-acceptance in the 45 countries surveyed.

It is interesting to me to note that the outcry by American LGBTQI world is much more robust when gay people are arrested and subjected to torture and harsh treatment in countries such as Chechnya- Russia – is that a white thing? Do black lives matter in the LGBTQI community? Does Africa matter? I once approached a well known transgender American and she told me – we have so many problems in America in our community, its difficult to look beyond. Wake up! Wake up for ALL of our global LGBTQI community.