IDAHOT –  The International Day Against Homophobia, Transphobia and Biphobia was created in 2004 to draw the attention of policymakers, opinion leaders, social movements, the public and the media to the violence and discrimination experienced by LGBTI people internationally, and all those who do not conform to majority sexual and gender norms. The date of May 17 was specifically chosen to commemorate the World Health Organization’s decision in 1990 to declassify homosexuality as a mental disorder.   As Chelsea Manning’s release coincided with IDAHOT, we had a a cake and wrote a card to welcome her celebrate her freedom. 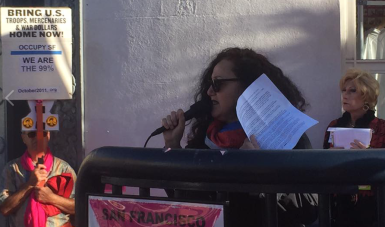 I made the following remarks at Harvey Milk Square in The Castro San Francisco, under the iconic  huge Castro Rainbow Flag:   ( The writing is colloquial- styled for rally type speaking – noting how I place in caps that which I emphasize when speaking….)

Thank you Gary Virgina for your kind words and excellent organization of this extremely important gathering, – Thank you to sponsors and fellow speakers, Donna Sachet, Tom Ammiano, Subhi Nahus and Patrick Carney-  and to all of you here today!

(Off script: Its a sad irony that to keep warm I am wearing this South African flag around my neck, as it bears the names of twenty fallen lesbian comrades, all to horrific so called “corrective rape” and murder.)

While we have indeed experienced much progress here in the USA since the World Health Organization retracted GAY as a mental disorder, to birth the first IDAHOT in 1990, – FOR LGBTI people, around the world THINGS HAVE GOT WORSE!

Today I am here for the African Human Rights Coalition to commemorate IDAHOT by raising awareness. The harm to rights and the VIOLENCE perpetrated against African LGBTI people is severe AND reprehensible.

We serve – LGBTI refugees and asylum seekers, the victims and survivors of the homophobia that has caused what is amounting to large migration of LGBTI people through Africa and around the world. We provide humanitarian services such as safe shelter and also advocacy.

On this IDAHOT, it is important to recognize that it is IMPOSSIBLE to move towards a world of equality and dignity unless we DECRIMINALIZE homosexuality and call OUT those who misinform, promote myth and preach hate!

Evangelicals have upped the ante on foreign continents: WE MUST SPEAK OUT AGAINST THIS.  THESE PEOPLE MUST STOP THEIR HOMOPHOBIC LIES AND THEN THE VIOLENCE WILL SUBSIDE!

There are over 30 African countries that criminalize homosexuality through old Colonial Penal Codes – and several have further institutionalized THIS form of homophobia through MORE onerous and MORE punitive anti-homosexuality legislation.

I applaud the outcry against the horrors we are seeing perpetrated on our gay brothers in Chechnya.  NOW –  I ask you to fight for our BROWN brothers and sisters on the continent of Africa JUST as vigorously as you are doing for the Chechnyans.

In Cameroon hundreds of LGBTI people are detained in deplorable conditions-  in prisons- simply for being gay – and for years at a time without trial or representation. Just last week, in Nigeria, 53 gay men went on trial for attending a same-sex wedding – and I would tell you MUCH more if I had the time.

Today I am asking you to think globally: I was shocked when a renowned LGBTI celebrity – who I asked for help – declared we have “too many fish to fry here in America before we look abroad.” This should NOT be the way we think. We are a global community and we owe each other allegiance through absolute support and unity – no matter where we are – WE ARE ONE!

In America LGBTQI youth in particular continue to face the insidious burden of bullying, rejection, discrimination and violence.  When we talk about them lets remember our LGBTI gay youth from all around the world AND Africa too – where the consequences are dire.  BECAUSE when criminalized there is no support at all.  ABSOLUTELY nowhere to turn . They call on us here in America to provide support for safe shelter – we are “mom” – “dad” – because we the global LGBT community is all they have with nowhere else to turn.  Their own parents want to kill them – out of fear and shame. They have been expelled from school –  banished by tribal chiefs –  landlords will not house them.  And the local NGO’s have been outlawed. Most cannot cross borders to seek UNHCR help.  They only have a few of us and our bandwidth is low.

Currently African HRC is attempting to support over 300 LGBTI people in Kenya and others in several other countries.  That is a tip of the iceberg. Africa is a huge continent and there is now a major migration of LGBT people to be counted among the 21 million refugees in the world.

Donald Trump’s EO’s, notwithstanding his losses in the courts so far, have served to confuse, cause chaos and slow down an already slow process, hurting LGBTI refugees especially as they suffer in host countries that criminalize them and  are often assaulted by straight population of refugees.   We at African HRC have submitted an amicus brief in the Trump appeal case and we ask that you all continue to keep an eye on this trajectory and provide support where you can.

Finally before closing my remarks, I would like to draw your attention to the extreme plight that homophobia has caused to African lesbians and others around the world – especially those who have been brutalized by that hideous concept of so called “corrective” rape, endemic to South Africa and severe in other countries such as India. (Taking off the flag from around my neck and holding the names up for people to see).

As we remember the sad loss of these beautiful souls and the unconscionable acts which took their lives, I must emphasize that the milieu is ripe for exacerbating this problem where self styled educationalists and preachers misinform – touting that homosexuality is a choice.IT IS NOT A CHOICE!

What is the good of commemorating days like IDAHOT if we fail to call out the continued homophobic words and acts of Governments –  Evangelicals –   Preachers and EVEN the religious MODERATES who remain silent. They too are complicit in that silence – and so – bringing their religions into disrepute. They must ALL be held accountable.   We must see to it – THAT IS our job.

SPEAK OUT AGAINST THIS HATEFUL ADMINISTRATION

RESIST TRUMP AND JEFF SESSIONS AND THEIR CRONIES

HOLD OUR OWN PURVEYORS OF HATE ACCOUNTABLE

RESIST REGRESSION AND HATE WITH EVERY FIBRE OF YOUR BEING

Here are the names of the 20 young lesbians appearing on my the SA Flag – from SA who were raped and murdered: