Los Angeles – This time focused on youth in detention, a new study by scholars at the Williams Institute found that sexual minority youth are incarcerated at disproportionately high rates.  Once they are incarcerated they are more likely to be held for long periods of time and experience sexual victimization.

“The rates of sexual victimization of youth in custody by peers is high and lesbian, gay, and bisexual youth report sexual violence by other youth at much higher rates than their heterosexual peers,” said Dr. Bianca D.M. Wilson. “The findings support calls by policymakers and advocates for the need to pay attention to the unique needs of LGB youth in state systems.”

In Disproportionality and Disparities Among Sexual Minority Youth in Custody in the Journal of Youth and Adolescence, researchers Bianca D.M. Wilson, Ph.D., Sid P. Jordan, J.D., Ilan H. Meyer, Ph.D., Andrew R. Flores, Ph.D., Lara Stemple, J.D., and Jody L. Herman, Ph.D. consider the extent to which sexual minority youth are disproportionately incarcerated in the U.S. juvenile detention system and whether sexual minority youth are incarcerated for longer periods than heterosexual youth. The study also considers the prevalence of sexual victimization while in custody for sexual minority youth compared to their heterosexual peers of the same gender. Sexual minority youth include those that identify as lesbian, gay, or bisexual, as well as those that identified as mostly straight but had some attraction to the same sex.

Findings were based on the 2012 National Survey of Youth in Custody-2 (NSYC-2) which was comprised of anonymous surveys of youth in a nationally representative sample of juvenile correctional facilities that included an indicator of sexual orientation. 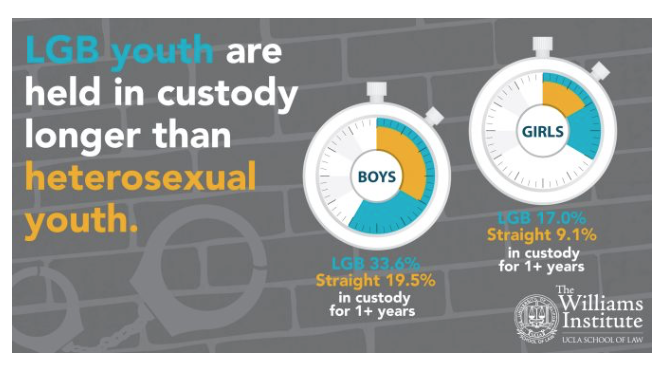