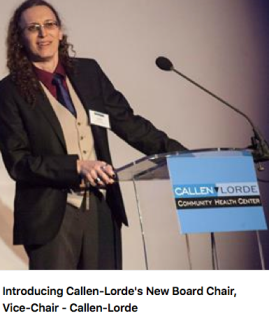 New York, NY- Callen-Lorde Community Health Center’s Board of Directors has elected Laura A. Jacobs Chair of the Board, the organization’s first trans and genderqueer-identified Board Chair in the organization’s history. Jacobs is a psychotherapist in New York City, New Jersey and Westchester, who works with transgender and gender-nonconforming, LGBTQ, and sexual/gender minority populations. Jacobs has been a client of Callen-Lorde since 2001, and has served on the Board since 2011.

“I am thrilled and honored to assume this leadership role on Callen-Lorde’s Board of Directors, particularly as the agency expands to meet the health care needs of even more LGBTQ people in New York City,” said Jacobs. “As the agency’s first trans and genderqueer-identified Board Chair, I bring a perspective that ensures the voices and concerns of our diverse communities will be top of mind as the Board shapes Callen-Lorde’s priorities for the next decade.”

Jacobs has presented on gender and sexuality for conferences, including the World Professional Association for Transgender Health, the Society for Sex Therapy and Research, the Gay and Lesbian Medical Association, the Philadelphia Trans Health Conference, as well as at organizations and schools including the New York City Department of Health and Mental Hygiene, NY State Society of Clinical Social Workers, Mt. Sinai School of Medicine, Weill Cornell Medical College, Rutgers University, and NYU Silver School of Social Work. Jacobs is also a consultant and former member of the Board of Directors of Trans Bodies, Trans Selves.

Callen-Lorde’s Board has also elected Lanita Ward-Jones to Board Vice-Chair. Ward-Jones, who identifies as a queer African American woman, is the Manager of Administration for the Vice President/General Manager at the Beacon Theatre in New York City. In this capacity she provides a broad range of managerial, analytical, project and office management assistance while liaising with the community and the company at large.

A stage manager by trade, Ward-Jones mastery of theatre operations provided the foundation for prideful success in working harmoniously with a varied group of individuals towards a common goal. She has been faithfully involved with Callen-Lorde for the past 9 years as a committed patient, advocate, volunteer, donor and member of the Board since 2015.

“Callen-Lorde continues to be a top healthcare provider in New York City, including now in my home borough of the Bronx. I am eager to take on this role and work for the continued advancement of this vital organization and the LGBTQ communities it serves,” said Ward-Jones. “I’m excited to roll up my sleeves alongside the Board and staff to brainstorm creative ways to support the expansion of Callen-Lorde’s brand and its services. I’m truly grateful for this opportunity to help make a difference.”