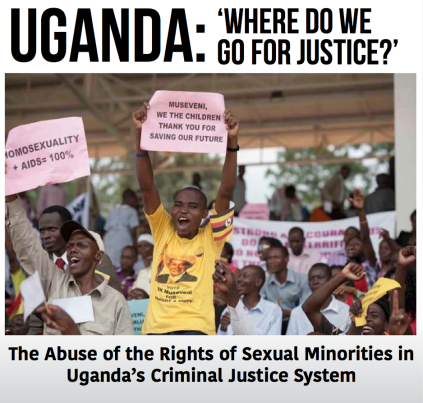 In March 2012, SMUG filed a lawsuit against Scott Lively for his role in the persecution of the LGBTI community in Uganda. SMUG, represented by the Center for Constitutional Rights, is suing Scott Lively for his involvement in a conspiracy with Ugandan anti-gay leaders to systematically deprive the LGBTI community of their fundamental rights in violation of international law. The case affirmed an important legal precedent when the court ruled, in a historic decision denying Lively’s motion to dismiss, that persecution on the basis of sexual orientation and gender identity is a crime against humanity – a serious crime under international law.

Said Center for Constitutional Rights Senior Attorney Pam Spees, “The reports underscore the seriousness of the situation LGBTI people face in Uganda – on both a personal and political level. They paint a clear picture of just how dangerous and harmful the politics of intolerance and exclusion are and why international law treats persecution as one of the world’s most serious crimes.”

Independent experts are often used in U.S. litigation to provide a specialized level of knowledge or expertise on subjects relevant to the case. The three are: