On a Friday afternoon, in February 1969, as Jewish Sabbath shoppers filled local markets and stores, terrorists planted a bomb in a crowded grocery store in downtown Jerusalem. The bombing sought to take more lives than it did. While many were spared, 2 people died and 8 were wounded.   The terrorists were caught, convicted and sentenced to life in prison.  Who would have thought that 47 years later, this saga would replay in an America courtroom. And who could have imagined that the convicted terrorist mastermind would become the victim and that the victims would be forgotten!

This convicted terrorist served only 10 years of her life sentence in Israel due to a prisoner swap, and is now fighting her immigration fraud conviction to become a U.S. citizen. If she succeeds she will enjoy the privileges, rights and all America has to offer a free person.  Rasmea Odeh, (Rasmeah, Rasmieh) seeking citizenship in the U.S.A., was convicted of lying on her immigration forms, and a movement of anti-Israel BDS supporters have enveloped her, attempting to turn the terrorist into a revered victim, for their cause, with unconscionable insult to the memory of those who were robbed of their lives, and at great expense to the families who mourn their deaths, all these years later.

The victims were 21 year olds, Edward Joffe and Leon Kanner.

How anyone can support U.S. citizenship for a person convicted and sentenced to life imprisonment for the bombing murders of fellow human beings, escapes me.  How anyone can participate in the dirty trick of converting a terrorist into a victim, escapes me.  Yet Rasmieh Odeh, has become a poster victim for the BDS movement and anti-Israel activism here in the U.S.A.

Yesterday a panel of judges on a U.S. federal appeals court, sent back to the U.S. District court, the case of Rasmieh Odeh,  found guilty of lying on immigration forms , about her alleged role in bombings in Israel in 1969 that killed two civilians.

As reported by The Detroit Free Press:

The panel of judges said that evidence related to Odeh’s PTSD may have been unfairly excluded from the trial.

The U.S. Court of Appeals for the Sixth Circuit ruled today that “our reversal is based on the categorical exclusion of PTSD-related evidence” from the defense that said Odeh, 68, suffered from trauma that caused her to repress memories of her convictions in Israel.

But the Appeals Court, in a narrow ruling,  stopped short of deciding “whether a new trial would be required once the evidentiary determination has been made. The judgment of the district court is vacated.” So now ti goes back to Judge Drain.

A spokesperson for the U.S. Attorney for the Eastern District of Michigan Barbara McQuade said today: “We respect the Sixth Circuit’s opinion and will argue our position at the time of the evidentiary hearing which will be set by Judge Drain.”

Result: If the lower court decides the PTSD testimony is admissible, it will require a new trial. If the court finds another reason to exclude the testimony, the case will go back on appeal.

Background as explained in Wikipedia:

Odeh was convicted in 1970 by an Israeli military court of involvement in fatal terrorist bombings, and again in 2014 by a US federal jury of immigration fraud.

Odeh was arrested in March 1969, and in 1970 was convicted and sentenced by an Israeli military court to life in prison for her involvement in two terrorist bombings in Jerusalem and involvement in an illegal organization, the Popular Front for the Liberation of Palestine (PFLP). One of the bombings killed two people, and injured eight others. She spent 10 years in prison before she was released in a prisoner exchange with the PFLP in 1980.

While in the U.S.A., Odeh worked as Deputy Director with Hatem Abudayyeh, Executive Director of Arab American Action Network (AAAN).  Abudayyeh’s home was raided  in a 2010 FBI investigation,  for ties to Palestinian terrorists.

Odeh was convicted of immigration fraud on November 10, 2014, by a jury in federal court in Detroit, Michigan, for concealing her arrest, conviction, and imprisonment for the 1969 bombings.  On December 11, 2014, she was released on bond pending sentencing. 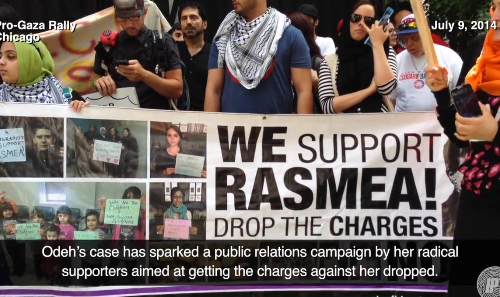 On February 13, 2015, federal Judge Gershwin A. Drain denied Odeh’s request that he either overturn the federal jury’s conviction of her or grant her a new trial. He ruled that her argument lacked legal merit, as evidence showed that Odeh illegally obtained U.S. citizenship, the jurors “clearly did not believe [her] explanation”, and that “the evidence was more than sufficient to support the jury’s verdict.

Odeh was sentenced to 18 months in federal prison on March 12, 2015, stripped of her US citizenship, and will be deported from the United States to Jordan once she is done serving her time. She is free on bail while she appeals.

Now the case will go back to Judge Drain to hear the evidence alleging  PTSD caused her a memory lapse.  The contradictions are there, as I recall seeing a report noting that Odeh said at one point that she thought the form referred ONLY to convictions of crimes in the U.S.A.

As the movement builds to crown her victim and ensure her U.S. Citizenship, it is my hope that more people will learn about this and express their outrage.  Odeh is anything but a victim.  She is still perceived by some as a dangerous terrorist, capable of much more.  Her connections to Hatem Abudayyeh, once suspected of terrorist activities,  is ongoing, as he leads the quest for her freedom.  She has been sentenced to 18 months by the U.S. Court and then to deportation. In my opinion, even if deported, she continues to escape true justice.  I do not wish her physical harm – but I do hope that she will be deprived of her ability to cause further harm to others,  whether emotional or physical.

In the Video series below, you will see Rasmieh Odeh participating and at the center of a Chicago rally where she calls for the destruction of Israel. The rally chants for Jews and Israel to be driven into the sea.

The videos juxtapose the family of the victims and their pain against the Odeh supporters and their sympathy for her. These supporters show no regard whatsoever for her crimes with zero reflection on the true victims and their families or for the pain she caused.   Odeh is not contrite. She is self righteous,  asserting her entitlement to U.S. Citizenship, all the while continuing to expound anti-Israel rhetoric.  This is just shocking. Please watch the videos.

The Investigative Project on Terrorism produced a short series of videos , where they tell the story of Odeh, expose her lies, speak to the family of a victim, and expose the unraveling the Spin Strategy attempting to turn a terrorist into a victim:

A series of videos elucidating the crimes committed by Odeh in Israel, can be seen HERE,

Supporters call Rasmieh Odeh a community leader. They spin her victimization as a community leader who is “under attack,” stating that there is no reason to “criminalize her history and her contribution to her people.”  In my opinion this type of rhetoric exalts terrorism. There is a difference between exaltation and forgiveness and surely forgiveness lies in the arms of the real victims.

The brother of one of the terror victims, Basil Joffe, who in the series expounds on his family’s suffering, especially that of his late mother who lost her son, notes that if this group of people want to support, they have to at least acknowledge what she has done.

The brother of terror victim, Edward Joffe, believes that Odeh, is an example of where a perpetrator becomes a victim.  Although the U.S. trial is about immigration fraud and not terrorism, Odeh, he believes,  is trying to retry her terrorist charges “in the court of public opinion. ” She is clearly, with the help of anti-Israel supporters,  manipulating these charges of fraud to her advantage and that of the surging anti-Israel movement. He believes the people who are supporting her are completely misguided.

Video 2: Watch here as we learn more about the victims.

The second video speaks in more detail about the victims of Rasmieh Odeh’s terro attack. This installment traces the life of Edward Joffe, one of the two college students killed in the bombing. His brothers explain what prompted the family’s move from South Africa to Israel during the 1960s, and describe Edward’s hopes and dreams before his murder.

ICE Retired Chief in Miami describes Odeh: as an “unrepentant terrorist, who has used the United States immigration – who has gamed that system, to get benefits.”

This video also speaks to the simplicity and true meaning of Zionism and especially of what it meant to many South African Jews, back in the 1960’s.

“A Spin Strategy Larger Than Rasmieh Odeh Herself” click here. 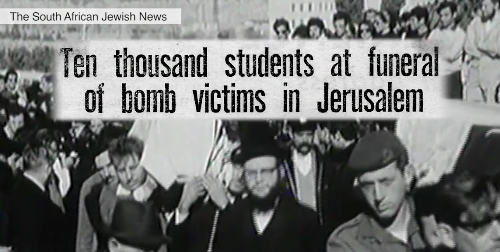 UPDATED MARCH 11, 2016: LEGAL –
On March 7, the USAO (AUSA Gorgon) filed a Motion for Extension of Time to File a Petition for Rehearing or Rehearing En Banc.  From the motion, it appears the strategy of the prosecution is to consider filing for either a rehearing of the matter before the three judge panel or for an En Banc hearing of the full 6th Circuit.  Presumably, the 6th Circuit will approve a request for an extension .  The next action will then be what action the prosecution actually takes regarding further appeal.

It seems this case will take a long while yet. All the while it seems Rasmea Odeh continues living in the USA, with her platform to protest Israel, all the while drumming up support with her smokescreen the supposed community work she is involved in through her ‘job’ as Deputy Director of The Arab American Action Network.