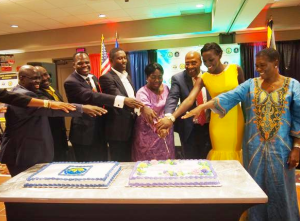 Now here is an interesting birthday celebration to report. Vehemently anti-gay Hon Rebecca Kadaga, the Ugandan Speaker of Parliament, celebrated her 59th birthday in the country which has values she openly detests.  She was lavished with a birthday cake by members of a US based Twegaite, an organization of development minded Basoga people living in the United States.

The group was holding its annual convention in Minneapolis, Minnesota to fundraise for the completion of a Cancer Unit they are setting up at Jinja Hospital in Uganda. Thank God for money from America!

Born in back 1956 , Kadaga will be seeking yet another term as the Kamuli Woman Member of Parliament, a position she has held since 1989.

How the hell did these human rights abusers and democracy oppressors get visas to the USA in the first place – when most LGBT people seeking refuge from their persecution are denied such visas?  Well that is another matter and one to notch up for US State department hypocrisy ..later!

“Together we can transform the economic and social landscape and livelihoods of the people of Busoga. A key ingredient for the development of Busoga is good leaders who can work with government,” said the Prime Minister.

Did he leave out this part out of the speech:….

“And we will come to America to raise their money and do it even though we hate what these equality loving Americans stand for.”

Kadaga and her anti gay rants expound the most reprehensible ignorance when it comes to homosexuality:-

“Ugandan lawmakers are once again considering a bill that would heighten punishments for not only homosexual acts, but for any LGBT advocacy. Ugandan Parliament Speaker Rebecca Kadaga is one of the chief proponents of such measures, and this weekend she warned Christian ministers in the country that they have much to fear from gay rights activists.

“Be very careful because gays are here to distort our heritage,” she told clergy gathered for Golden Jubilee celebrations at St. Stephen’s Church in Pajwenda on Sunday. “We have discovered that they adopt our children and confine them in gay communities abroad to train them on gay practices. By the time they come back home, they are already influenced by homosexuality and are used to influence others in the community.”

Kadaga also warned that computers and books donated to Uganda schools include software and literature that promote homosexuality.”

Kadaga brought the Anti-Homosexuality Act to the floor for a vote in Uganda’s parliament when there was no quorum. This unconstitutional passage of the Act caused it to be invalidated by the Courts after President Museveni signed it into law.  She did it to be exalted by the populace as a heroine. And while doing so she participated in what turned out to be an overnight spike in evictions, firings, imprisonment, assaults, rapes, blackmail – in essence a state sanctioned mass persecution of LGBT people in Uganda.

She has berated President Obama for his pro LGBT stance – telling him when he was in Senegal in 2013 to back off speaking against the Bill in Africa.

She has said that Ugandans need the anti-gay bill, so that “we will lock up people because it is what its people want.”

“If these are the conditions for aid and loans…loans we pay with interest. Who is giving us free money? We pay. So I want to appeal to you the ambassadors, be strong and tell them off directly. …. and Soon they will tell us that bestiality is fine and a foreign policy issue. Will you agree?”

Kadaga was involved in a row with Canada’s Foreign Minister John Baird over gay rights at a meeting of the Inter-Parliamentary Union in Quebec. When Mr Bairn warned Uganda not to trample on people’s human rights, Ms Kadaga replied:

“If homosexuality is a value for the people of Canada they should not seek to force Uganda to embrace it. We are not a colony or a protectorate of Canada.”

While I applaud the efforts to raise money for cancer patients in Uganda, I abhor the hypocrisy of the likes of Kadaga – she speaks out of two sides of her mouth. If she wants to dance on our soil in celebration of her birthday and to raise our money for her people then she must stop pretending that Uganda is excluded from participating in what the world considers to be basic human rights, just because it is a sovereign country.  We are all sovereign countries. And we all have a duty to abide the Universal Declaration of Human Rights as well as our own Constitutions.

She has a choice – if she continues to criticize our stance on human rights what is she doing here raising our money?