Santa sent the 1AngryOldLesbian.org (1AOL) elves out again for the second time this first month of 2015 with a lump of coal to the Human Rights Campaign DC flagship in support of the demonstration being orchestrated by ACT UP NY at the HRC Greater NY Gala tonight. As Santa has shared recently with HRC, honoring companies on their Corporate Equality Index (CEI) that participate in illegal activity is wrong.

Tonight’s actions in NY, SF and DC are about getting out on the streets and making some noise. Taking ACT UP’s own words, 1AOL posted a 15’x3′ banner on HRC’s wall (on the actual building, not their virtual Facebook wall) focusing on tonight’s HRC honoree, General Electric. The pinkwashing cover they provide to criminal corporations is despicable. What indicator will HRC put into place? When do the crimes of their honorees’ rise to the point of penalization that would keep them from being lauded in the public square as “good corporate citizens”? On Christmas Eve we highlighted Monsanto’s 100% CEI rating – a corporation known to be destroying plants and animals across the globe. Now you are lauding a corporation for its LGBTQ employment excellence while it continues to offend on the basis of age, race and sex discrimination including pending lawsuits. And that’s all before we mention the GE boycott that has been in place since 1986… 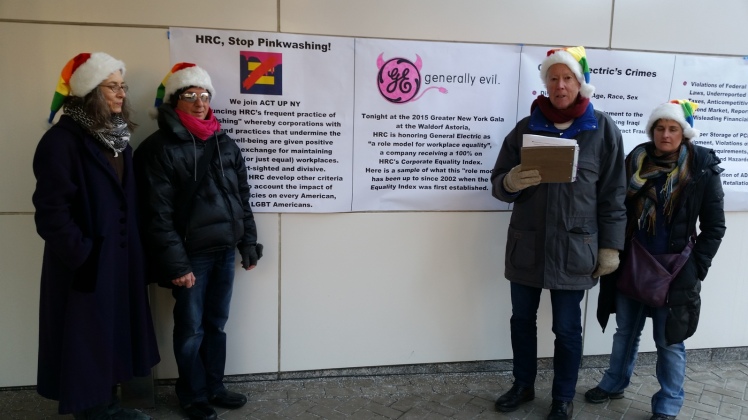 Here is our message to HRC tonight:

We join ACT UP NY denouncing HRC’s frequent practice of “pinkwashing” whereby corporations with policies and practices that undermine the people’s well-being are given positive publicity in exchange for maintaining LGBT-friendly (or just equal) workplaces. This is short-sighted and divisive. We demand that HRC develop other criteria that takes into account the impact of companies’ policies on every American, not just LGBT Americans.

Tonight at the 2015 Greater New York Gala at the Waldorf Astoria, HRC is honoring General Electric as “a role model for workplace equality”,  a company receiving a 100% on HRC’s Corporate Equality Index.

Here is a sample of what this “role model” has been up to since 2002 when the Equality Index was first established.

Illegal corporate activity should never be rewarded. The LGBT community has the right not to be used to give corporations like GE cover from wrong doings. Immediately disqualify corporations from the Equality Index when involved in illegal activity. HRC don’t you see the irony of giving an award to a company who participates in sex, race and age discrimination? 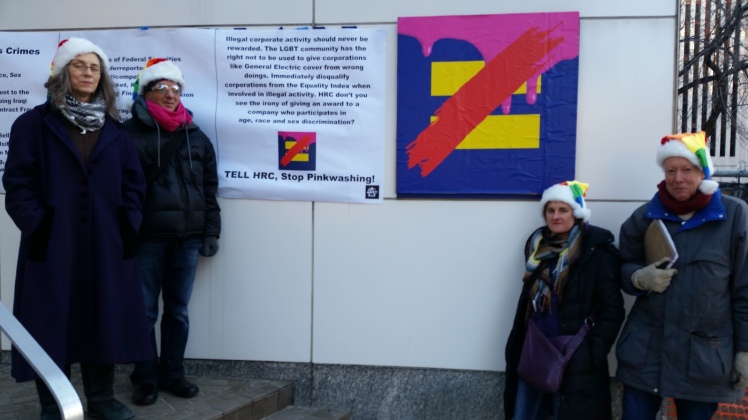 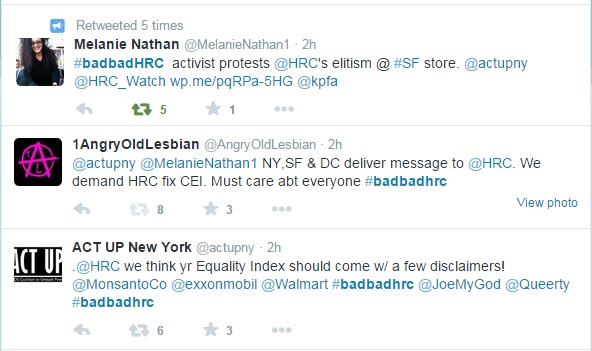 4 thoughts on “Solidarity with ACT UP at Human Rights Campaign D.C. HQ”