…and the letter from Santa tells Chad why!

Santa Claus asked the members of 1AngryOldLesbian.org (1AOL) if they wouldn’t mind delivering a letter to the Human Rights Campaign (HRC), and they merrily agreed.

Though the weather outside was frightful, their spirits were high as they donned their rainbow Santa hats while listening to the mood setting Perry Como’s “Santa Claus is Coming to Town”. With the help of his awesome elves, the letter delivery went off without a hitch.

And of course the requisite coal! 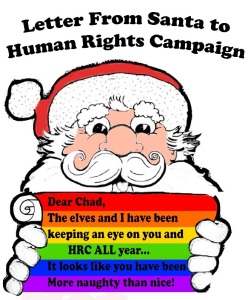 I see you when you keep supporting the Employment Non-Discrimination Act (ENDA) despite calls from Julian Bond and the LGBT community to stop promoting its broad religious exemptions which would codify discrimination into law!  I will be watching what you do with the religious exemptions in the new comprehensive LGBT equality legislation.  The only thing that better be broad about the comprehensive bill is the coalition of organizations you invite to the table!  You are the one who keeps asking people “Are you all in?;” don’t you think they will all want to be too?

I see you when you take $3 Million from vulture capitalist Paul Singer to effectively make the world’s poor, whom he preys upon, pay for you to spread pro-LGBT support globally.  This is not an area you can cavalierly dabble in, Chad.  There will be life and death consequences.  And remember, Singer helps fund candidates in the U.S. who vote against your own best interests.

I see you when you raise funds with your Export of Hate report release, yet fail to support any of the organizers actually doing the work you use to create your reports.  I expect to see you start to make amends by donating no less than $200,000 a year to help fund my friends doing such fabulous work at The Center for Constitutional Rights with their Sexual Minorities Uganda v. Scott Lively court case.

I see you when you can’t seem to find the funding, despite your $50 Million budget, to educate your own community on the benefits associated with the historic Equal Employment Opportunity Commission (EEOC) Macy v. Holder decision and the protections it brings to the LGBT community.  I couldn’t agree more with my good friend Dana Beyer who wrote on Huffington Post “…in the vacuum of national advocacy, when those with the broadest reach don’t use their resources and platform to educate and inform, it will be as if those protections do not exist, or they will exist only for the few lucky enough to have discovered the truth on their own.”  I expect to see a well thought-out, collaboratively developed, million dollar educational campaign to include media, elected officials, the general public, and judges, in place by the Spring so that cases can be brought!

I see you when you call Monsanto one of “the best places to work” awarding them a 100% rating on this year’s Corporate Equality Index (CEI).  Seriously? Again?  I thought you had learned after the whole Goldman Sachs debacle. Even the Washington Blade questioned why Seyfarth Shaw, Exxon Mobile’s defense counsel in anti-gay bias cases, was neither rebuked by you nor docked any of its 100% rating points on your Index.  Also, is there a reason that you continue to allow Chris Carolan, a Seyfarth Shaw employee to sit on the HRC Board of Directors?  Year after year you make these mistakes, turning a blind eye to environmental and social injustices as if issues exist in individual silos.  Your Index is a pinkwashing tool for those who do harm.  The time for that to stop has long passed.

I see you when you take advantage, during the Olympics, of the fine Sochi campaign of my friends doing such fabulous work at Queer Nation NY, making your own Love Conquers Hate t-shirts for fundraising purposes.  You are very quick to capitalize on the tireless work of grassroots activists, but do you lend your war chest of fundraising dollars to aid their unfunded work?  I expect to see you doing just that next year!

I’ll be watching and listening again in the coming year and look forward to bringing you many gifts next Christmas.  I haven’t given up hope you can learn to support campaigns inclusive of all in the queer community and its many supportive allies. 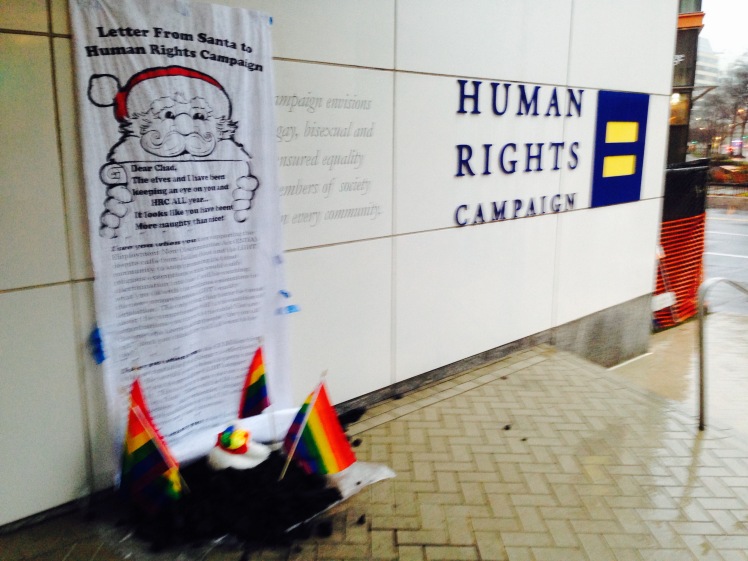 “Primarily we were at HRC for two reasons today:

Much thanks to the intern elves of one of our favorite DC organizations who worked tirelessly laying out Santa’s letter for the printer, enabling us to print the longest piece yet (20 feet!!) at our wonderful local blueprint shop. And a big thank you to all for coming out bright and early on such a gloomy Christmas Eve to help with today’s delivery!

*Today’s weather sure challenged our iPhone5’s ability to focus…

HRC’s huge membership and whopping donations serves as the basis for its power.  But they have no mandate from many LGBTI activists who are more keenly in touch with the issues and nuances than the average member. That type of power, wielded unilaterally, does not always serve our community. The power is used as a back tickling footsie play that has harmed our interests and served to continue the notion of self marginalization.  They do not have a leadership mandate beyond self professed power and their “in” inside the White House and halls of Congress has hijacked our issues with the same capitalistic force of the money machine they support. I fully support this letter from grassroots activists at 1angryoldlesbian.org and though sad it has come to this, am happy to host it on these pages. Please community read this and lets hear your outrage – we do not want HRC pursuing ENDA their way – not for a minute longer,  or meddling to cause more onerous religious exemptions in our hopeful Comprehensive and Full Federal Equality Legislation to come.  Do not allow HRC to hijack our renewed push for Full and Comprehensive Federal legislation. Thanks and Happy Holidays, Melanie Nathan.