At midnight, and with a portrait of the Queen in the background, Philip Glanville and Trey Mcrary took their vows as one of Britain’s first same-sex couples to marry under England’s new marriage equality laws.  Today in the United Kingdom and Wales, the first civil partnership conversion ceremonies and marriages became legal. 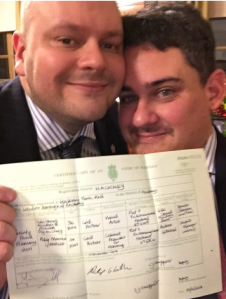 When the first same-sex marriages took place on the 29th March 2014, couples who were already in a civil partnership were not allowed to marry.

Couples can choose a religious venue, hotel or other venue to host their conversion ceremony. A superintendent registrar must be present for the first part of the conversion, and a religious figure may take over to conduct the rest of the ceremony.

It sounds complicated – nonetheless the journey to marriage equality in the UK is now complete as joyous marriage in earnest begins.