On October 16, we reported that Amnesty International concluded a report on repressive and discriminatory legislation enacted over the last 18 months in Uganda that has led to increasing state repression, violence, homophobic and gender-based discrimination. The following day Amnesty International hand delivered the report to the new Ugandan Prime Minister, Dr. Ruhakana Rugunda.

Prime Minister Rugunda assured Amnesty International, a global human rights watchdog group, that the government will review issues that the organization raised in this report. 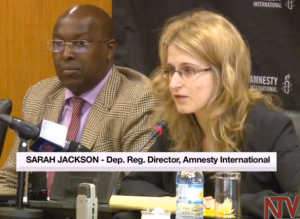 “Issues will be looked into, the government will examine the Report,” Dr Rugunda told Amnesty’s Deputy Regional Director for East Africa, Sarah Jackson. The meeting was at his office on Friday, during which she gave him copies of the latest Report.

The report was launched at Serena Hotel in Kampala on the previous day. During the meeting with Prime Minister Rugunda, Jackson called for a review of the Public Order Management Act, the Anti-Pornography Act and the Anti-Homosexuality Act.

According to Jackson, the laws should be reviewed to prevent what she called violation of freedoms of assembly and of expression, accusing the legal framework of failure to recognize the basic inalienable rights of individuals. 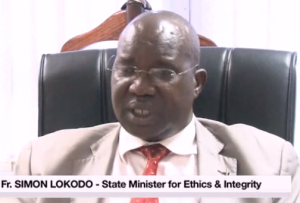 Individual subjects were interviewed by Amnesty International in Kampala for the Report.

It has become obvious that all Ugandan Human Rights abuses should be viewed together, holistically, as a pattern has developed, illustrated by the Amnesty report, clearly showing that several repressive legislative Acts have led directly to human rights abuses, showing in essence, state sanctioned abuse by police, government officials and the public at large.

It remains to be seen if the Prime Minister is merely providing lip service, when he asserts he will look into the report. Legislation that impacts human rights negatively has served Uganda’s ruling NRM party well, as well as its President Yoweri Museveni.

The attitude of the Government can be seen from Minister of Ethics and Integrity Simon Lokodo’s remarks in the NTV video below, where he asserts that these repressive laws are necessary “in order to maintain order.” Of course this would be the case where a dictatorial regime has 30 years of dictatorship to protect.  These laws have served to severely curb public freedoms to include expressions of dissatisfaction with government:     THE REPORT HERE.

The hashtag for the launch was #UgandaRuleByLaw, so you can see some of the coverage of the event online.

Muthoni Wanyeki, Amnesty International’s Regional Director for East Africa, also did an op-ed in the East African which is available here: http://www.theeastafrican.co.ke/OpEd/comment/Uganda-s–rule-by-law–sows-division-and-hatred/-/434750/2490822/-/giex1z/-/index.html

Prime Minister Rugunda’s statement after Amnesty International handed formally handed over the report to the Ugandan government is available here:http://opm.go.ug/news-archive/prime-minister-ruhakana-rugunda-meets-amnesty-international.html