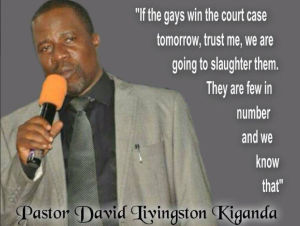 An Ugandan lesbian may be deported on Friday, unless we act fast. When Burton Youth for Christ members found out that their trusted interned employee of 10 months was a lesbian, they suddenly turned on her, fearing that she could harm or negatively impact their children.  They would no longer support her quest for asylum and with a mere five pounds in hand dumped her at the airport with an air ticket back home, to persecuting Uganda.  She was essentially left to fend for herself in a system that is not so friendly to LGBT asylees.

The United Kingdom’s home office has an insidious history of fast tracking and subjecting under represented asylees to further persecution through their process.  They also have a history of not understanding the issues and cultural impediments that face prospective asylees, such as fear of speaking out, lack of resources, and the impact of the trauma of persecution on how they conduct themselves. So what often seems not credible to the Home Office, is indeed credible for those who understand the nature of these horrific stories and how they impact asylees, and often down the line through further appeals proven to be true.

The same thing happens over and over again – and all needed is assistance with proper representation and enough time to sort out and fully investigate each case, before rushing to deportation.

Here is the Petition for Joan

The UK Government is about to deport lesbian asylum seeker, Joan Ayebare Tumwine , without giving her a fair opportunity, with proper legal representation to present her case: PLEASE help STOP the unjust deportation of Joan by signing this petition.

Joan Ayebare Tumwine is a Ugandan lesbian facing deportation from United Kingdom back to Uganda where she will face further persecution and where her life could be in danger.
Joan is scheduled to be deported on Friday 22/08/2014 time 8:00pm on Kenya Airways.

Joan came to the UK September 2013 to work for a year with a charity called Burton Youth For Christ. (BYFC) .  She was too afraid to tell her employers or seek their help because she had heard anti-gay remarks.

She worked there for ten months unable to find anyone she could trust to tell her story. She was locked into long working hours and unable to find help.

She wanted help and to seek protection. “I studied each one of them and the way they used to talk about gay people was not good and that made me not trust them with my problems and not only that, being Christians they did not like gay people.”

When she tried to claim asylum BYFC found out she was a lesbian and instead of helping her, tried to force her to leave the UK .

“They took me to Birmingham Airport and when we got there, Catherine then asked me whether I had decided that I wanted them to call immigration or whether I wanted them to put me straight on the plane to go back to Uganda. I told her to call immigration and she told me to give her a few minutes. When she came back, she told me that since it was a late Friday, there was no immigration officer to attend to me, so they couldn’t contact immigration and that the only option they had left was to put me straight on to the plane.They asked for my passport and I gave it to them, they then paid for the flight ticket.

They then tried to give me my passport and the ticket but I refused them. They said I had no option but to go. They went and checked me in and they came to tell me that they were taking me to Departures. I asked them to speak to any officer at the airport but they refused and told me that there was no one to talk to me. As we walked towards Departures, I saw a uniformed officer, (he was called Andy Lee) and I asked for help.”

Joans asylum was denied on issues that could easily be countered and explained with proper representation and the drafting of reports by professionals. But she has yet to be given this opportunity.

Joan appealed against the refusal however on the day of the Court she was sick and had an appointment to see a doctor however the Judge refused to adjourn the court hearing. Therefore Joan did not get a chance to make her case.

Joan provided the evidence that she was sick in form of medical records from Yarlswood detention center Health center, however this was rejected by the courts because she did the appeal herself.

This case has not  yet been fully investigated and Joan must be given a fair and just opportunity to do so.

Joan is currently being held unnecessarily in Yarlswood Detention center. There is no risk if she is released, as she desperately wants to ensure her asylum case is properly heard and that she receives legal status in the United Kingdom.

The current Anti-Homosexuality laws, recently invalidated by the Courts have sparked a backlash such as this quote from Rev. David Livingston Kiganda: “If the gays win the case, we are going to slaughter them.. They are few in number and we know that”

Currently many Ugandan lesbians and LGBT remain in hiding in Uganda in fear of their lives. They are unable to find work and many have been shunned by family, fired by employers and evicted from rentals.

In Uganda Parliamentarians are seeking to reinstate the law, which was invalidated only on a technicality

We have just found help for Joan. We urge people to sign this Petition that her deportation be stopped pending further investigation, reports and appeal.

Good news good news . We are happy to inform you that Joan Tumwine’s ticket has been cancelled. However we still have more work to be done. Thanks so much for your support.  Please keep signing petition in a show of support as Joan’s case continues to move forward. She is by no means out of the woods – and nor is he yet out if YARLSWOOD..s!  Thanks , Melanie.