OK LOL – seriously? Is that how dictators hold on these days?  I wonder how those poor women who have sold themselves into prostitution to feed their kids feel about THIS allocation of funds?  If I am wrong please let me know…. 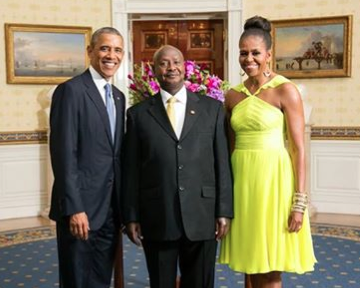 I have unconfirmed reports that President Yoweri Museveni, the dictator, who has sat on the Ugandan Presidential throne for 30 years, is currently in Washington D.C. for the African Summit, has hired an American Lobbyist to help him improve his image in the West. The dictator is most known for a myriad of human rights violations, which include assenting to the Anti-Homosexuality Act.

Rumor has it that the lobby firm is allegedly Mercury – whose website boasts:

“We use our expertise and reach to gain competitive advantage for clients. Our expertise comes from extensive must-win campaign experience and operating successfully at the highest rung of business, government, politics and media. Our reach is the ability to use strategic intelligence to mobilize the message and persuade the toughest audiences. We know what it takes to win in difficult situations. We have proven results for prominent figures, leading advocacy groups and the world’s most successful companies.”

The firm has its work cut out for it with an anti-gay, allegedly heavily corrupt, dictator for a client. I predict it will  take pulling 12 elephants out of a hat with the hat yet to be found to alter Museveni’s image. I mean how will Mercury undo the facts or spin the homophobia?

The laughable part of this, if indeed true, is that M7 has asserted he does not care about what Americans think about him, and has slammed what he calls Western and American values, reverting to Ugandan culture as justification for his inability to abide by The Universal Declaration of Human Rights.

When he signed the Anti-Homosexuality Bill, declaring life in prison for so called aggravated homosexuality and when he pronounced upon the sanity of gays, he was quite defiant and declared war on the LGBT lobby of the world.

However there is a laundry list of cleanup for Mr. Museveni and it starts with respecting democracy. Hand over the keys to the Palace Mr. M. and your image troubles will be well taken care of AND after you have done that take the hundreds of thousands of US dollars your tax payers will probably pay Mercury and feed a few more people back home.

If anyone finds more information on this please let me know. I have no interest in wasting my time chasing this turdious being who should not have been allowed into the U.S. in the first place. I have no respect for him at all. And am mad as hell at President Obama for giving him the red carpet.  (READ BETRAYED BY PRESIDENT OBAMA)

By the way Mercury if you need a hand isolating those issues which need ironing out, when I reach page 16 of my list I will give you a call…..

Hey readers let me know if this is true I don’t have time to pursue I am at a conference this week…. THANKS

U.S.-Africa Leaders Summit: Museveni Pays $600,000 For ‘New Image’ As His Past Ugly Remarks Finally Catch Up

The one-year contract is with Mercury LLC; one of the partners of the company is Vin Weber, a former Republican Congressman and campaign adviser to Mitt Romney, who was defeated by Barack Obama in the last U.S. election.

Some of Mercury’s functions will be “managing media relations” with specification that “the firm will monitor coverage of President Museveni as well as the country as whole.”

When he became president of Uganda in 1986 riding on the crest of guerrilla victory he was showered with praise as an intellectual that had picked up the gun to save Uganda and her people.

He soon became the darling of the West especially of the United States of America. He was showered with money and invitation to attend the annual G8 Summits of industrialized countries for boldly launching “shock therapy” stabilization and structural adjustment program (SAP) that was shunned or amended by governments including in Chile, Ghana and Tanzania.

WASHINGTON — One month after the U.S. government announced the first substantial sanctions against Uganda in response to its Anti-Homosexuality Act, the government of Yoweri Museveni signed a contract with the D.C. consulting firm Mercury to help with public relations and lobby in the United States.

Uganda signed the one-year contract worth $600,000 on July 17, according to federal disclosure filings. Messages to Mercury representatives were not immediately returned, but the contract says that “Mercury will provide consulting and communications services to promote trade and investment opportunities in Uganda.” That includes managing media relations, and specifies that the firm will monitor coverage of President Museveni as well as the country as whole. The filing is signed by former Republican congressman and Romney campaign adviser Vin Weber, a partner at Mercury.

Many countries enter into such contracts, but Uganda’s stands out because of its timing. President Museveni and other Ugandan leaders initially responded to condemnation of the Anti-Homosexuality Act from donor nations with defiant bluster, asserting that Uganda didn’t actually need foreign dollars. But in late June and early July — as Ugandan lawmakers confronted a looming deadline for producing the government’s operating budget — officials took steps in an apparent effort to mollify the U.S., the World Bank, and other key donors. This included the release of a statement on July 7 asserting that the law, which imposed up to a lifetime jail sentence for homosexuality and made it a crime to “abet” homosexuality, had been “misinterpreted as a piece of legislation intended to punish and discriminate against people of a ‘homosexual orientation,’ especially by our development partners.”