Jubilation as the  the Ugandan Court agreed – the AHA is Unconstitutional ! Well done to the Plaintiffs.  Congratulations to the Plaintiff team for your extraordinary courage and your resolve and the credit must go to all those who worked so hard on every front, especially the hard work of the extraordinary legal team – always on the correct side is justice!

In an extraordinary victory for human rights in Uganda, the Ugandan Court has ruled that The Anti-Homosexuality Act 2014 (AHA,) which was signed into law by President Museveni in February of this year, is unconstitutional.

In a packed court, a panel of five judges including Acting Deputy Chief Justice Steven Kavuma, Justices, Augustine Nshimye, Eldad Mwangusya, Solomy Balungi Bossa and Rubby Aweri Opio unanimously struck down the Anti-Homosexuality Act on grounds that it was passed without the required quorum and that Speaker Rebecca Kadaga was warned by three parliamentarians at the time, but ignored their concerns.

The case was ruled on the first issue only and then the court was adjourned. While this is extraordinary news, the Court has yet to rule on the further arguments presented by the Plaintiff’s, that the law violated their constitutional right to privacy and dignity, as well as the right to be free from discrimination, and cruel, inhuman and degrading treatment.

The court has asserted its independence by ruling against a law that has received such a huge amount of support from the general population of Uganda.

“Yes, to all you who believe in human rights for all.  History has been made today in Uganda when the Panel of five justices of appeal unanimously agreed with our submissions that the Anti Homosexuality Act, 2014 was passed without quoram and thus null and void under the supremacy of the Constitution. The speaker’s action of omitting to ascertain the quoram on the 20th December  2013 after it had been raised three times was an illegality under the Constitution and the Parliamentary rules of procedure.

It must be noted that the old Penal Code, for so called “Acts against the order of nature, remain on the books and is not impacted by this case. This draconian code has been interpreted to include homosexuality. This also does not change the sentiment of the society that supported the Bill or the rampant homophobia that its genesis and evolution had procured.

Through the process from passage to signature, President Museveni played his political cards by using his  assent to the Bill to win political points with his party and the populace, who hailed its passage with a rally and a ceremony “of thanks,”  where the many Church leaders, and supporters of the Bill celebrated.

The Bill drew a great deal of criticism from international community and leaders, with aid being withdrawn and some additional sanctions.

President Obama had called the AHA “odious” and rebuked Uganda for the law, which so many believed was not only unconstitutional, but also contrary to the International Declaration of Human Rights.  Museveni may have been saved from what may have turned out to be an humiliating visit to the United States, as activists had called for a travel ban on the Ugandan President.

In a surprise move, the Ugandan Court had pushed forward the hearing, from September to July, and many speculated that the unusual move was so that they could rule before the President’s attendance at the summit of African leaders in D.C. next week.

The AHA was originally introduced by MP David Bahati in 2009.  After the Bill was finally passed the there was a dramatic increase in persecution and incidents against LGBT Ugandans. 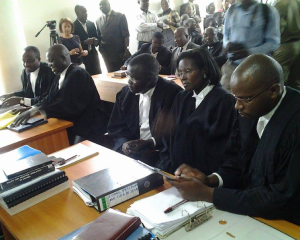 This is a defeat for the Ugandan religious community, including anti-gay Pastor Martin Ssempa, who has waged an active war against LGBTI Ugandans.

The court also awarded petitioners 50% of the costs of the suit. The case involved a group of pro-LGBTI campaigners who sued the Attorney General in March last year, challenging the passing of the Anti-Homosexuality Bill on various grounds.

The Plaintiffs and Ugandan human rights defenders as well as activists around the world have expressed jubilation at the ruling.

This is the Facebook screenshot as it appeared on the p[age of SMUG, a coalition of Ugandan human rights defenders:

It is unsure how the public will react to this news. Though there have been threats over an FM radio station during the course of this week, that if the Bill is struck down, many may still be in danger. The LGBT community is urged to still be cautious because of negative public sentiment as well as the fact that the old laws that purportedly criminalize homosexuality still apply.

It is also a shame that the Court did not decide on the human rights issue vs. the constitution as that could have put the matter to rest. But now there is a good chance that the anti-gay movement and parliamentarians will try and re-legislate with a quorum.  If this is the case, then the game will start all over again. The LGBT community will again be the political pawns they have been for the past 5 years, while politicians tossed the bill around like a volleyball to suit their political purpose. This battle could still rage for years to come.

We will keep you updated.

The defeated Ugandan MP David Bahati, author of the Bill and others have called a press conference. Above is he picture of David Bahati at the conference.

Reports are coming in that the attendees are accusing gays of supporting MPS financially . They are saying that the Parliament is ready now to sit in full quorum to pass the law.  They are also saying that gays are paying people to be gay and recruiting children to be gay.

Again the lies and myth are being perpetuated to drum up support for a Bill which is dead and which they threaten  they would try to revive.  All this kind of talk does is perpetuate the danger for gay people in Uganda, who will continue to be persecuted as a result..

According to one source Ssempa was seen crying in the court.

UPDATED:  Ugandans are now on the street. Protesting the outcome and driven here by the rhetoric of Bahati in press conference and the decision of the court. The crowd is gaining momentum and people are threatening to kill gays, according to my source, a reporter in Uganda who is not gay and witnessing the events unfold.

The FM radio Station is calling on people to take to the streets to protest.

One source on the ground has informed me that he had been in hiding but was determined to go to Court to hear the case. When the result was handed down, he said he ran for his life as he knew there would be protests. He is back again in hiding.

Ugandan press is reporting that the Government is going to petition the Court over the ruling – MONITOR:-

Government is to petition Supreme Court over Court ruling on the Anti-Homosexuality law.

Ndorwa West MP, David Bahati on Friday said that the Attorney General will petition the Supreme Court over the Constitutional Court ruling on the Act; just hours after court nullified it (Anti-Homosexuality law) which was approved by President Yoweri Museveni in February 2014.

“I want to thank the speaker, MPs who stood for what is right. The lawyer that represented government said she was not given chance to prove that there was quorum in parliament.

The court case ruling is no victory at all, the morals of the people of Uganda will prevail,” Mr Bahati said in a press briefing before adding, “The Attorney General who is very competent will petition the constitutional court over the constitutional court ruling. Our competent legal team will continue to petition the Supreme Court and I believe we will win.”  read more http://www.monitor.co.ug/News/National/Government-to-petition-court-over-anti-gay-law-ruling/-/688334/2405248/-/3linyez/-/index.html

Statements by some of the Plaintiff’s and legal team:

“The judiciary today has stood for the rule of law and good governance in striking out a law that was passed in a way that contravened the Constitution and the Parliamentary Rules of Procedure. This is a resounding victory for democracy in the country, and confirms that laws passed in violation of the Constitution cannot be allowed to remain on the law books” according to Prof. J Oloka-­‐Onyango, the first petitioner.

“This victory is for all Ugandans. It is an affirmation of the independence of the Judiciary and of a growing democracy: despite populist politicians claiming support for the law, the Court has stood up for what is right,’ said Adrian Jjuuko, Executive Director of the Human Rights Awareness and Promotion Forum (HRAPF), the ninth Petitioner.

READ MORE from my Article on HUFFPO 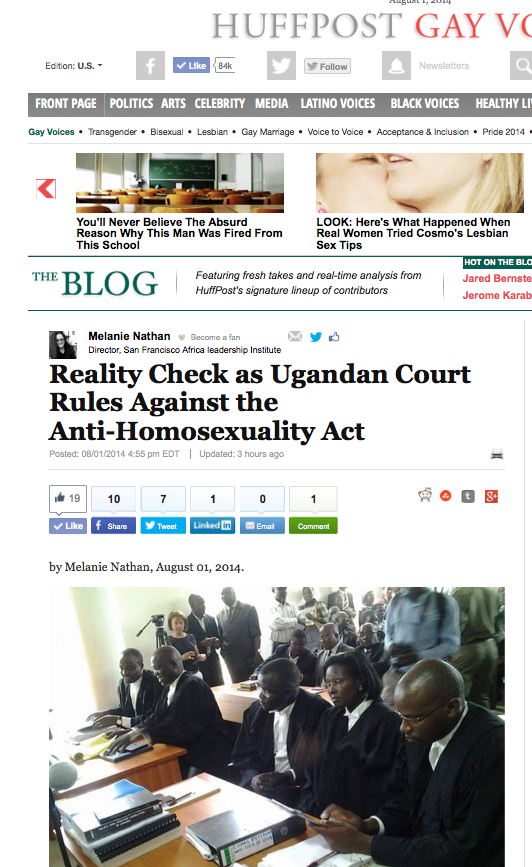