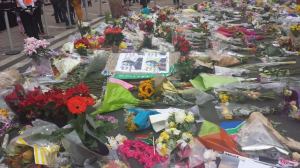 Good Morning, Mr Mandela , a memoir by Nelson Mandela’s personal assistant, Zelda la Grange, has lifted the veil of secrecy and mystery on the family power struggles that went on in the last few years of his Nelson Mandela’s life, and of the chaos at his funeral last December.

La Grange worked as a personal assistant to South Africa’s first democratically elected president for 19 years and spent more time with him than most in the years that followed him taking up office as president in 1994.

The Afrikaner started working for him as typist in the presidency when she was 23 and become his trusted assistant, spokeswoman and close friend. 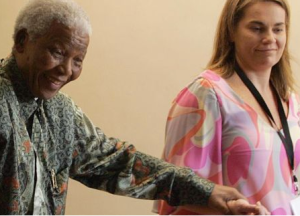 The book will reveal how Mandela’s wife Graca Machel needed accreditation to attend her deceased husband’s funeral,  and how his inability to express his wishes at the end of his life was used by family members to “step in and start controlling matters to their advantage”.

Makaziwe Mandela, Madiba’s eldest daughter, referred to Machel as Ms Frantic after she was described as being anxious after an ambulance broke down while transporting her husband to hospital.

In her book she writes that the Mandela family drama took a heavy toll on Machel and that “I don’t know of any person alive who has been treated with the amount of disrespect that people have shown towards Mrs Machel”.

The book, which will be released this week, also details the chaotic scenes that unfolded at his state funeral.

At one point it says Bono of U2, along with actress Charlize Theron, were initially refused entry into the VIP suite at Mandela’s memorial service at Soweto’s FNB Stadium.

After the memorial service Bono was again left out of the loop. And it took an intervention by former South African president FW de Klerk to get him and Naomi Campbell accreditation for Mandela’s lying-in-state at the Union Buildings in Pretoria.

Feathers are bound to be ruffled this week when Zelda la Grange, Nelson Mandela’s trusted assistant of 19 years, releases her long-awaited memoir – Good Morning, Mr Mandela – in the next few days.

Zelda la Grange (@ZeldalaGrangeSA) grew up in South Africa as a white Afrikaner who supported the rules of segregation. Yet just a few years after the end of Apartheid she would become a most trusted assistant to Nelson Mandela, growing to respect and cherish the man she had been taught was the enemy.

Zelda la Grange will speak about her new book in conversation with John Carlin. Good Morning, Mr Mandela tells the story of how a young woman had her life, beliefs, prejudices and everything she once believed in utterly transformed by the greatest man of her time. It is the incredible journey of an awkward, terrified young typist in her twenties later chosen to become one of the President’s most loyal and devoted servants, spending most of her adult working life travelling with, supporting and caring for the man she would come to call ‘Khulu’, or ‘grandfather’.

Zelda la Grange was born in 1970 and brought up in apartheid South Africa. She began working as a secretary for the government in 1992, in the Department of State Expenditure. In 1993 she moved to the Human Resources division and in 1994 she joined the office of the first democratically elected President of South Africa as a senior ministerial typist. She was promoted to one of President Mandela’s three private secretaries in 1997 and in 1999 Nelson Mandela requested her to remain in his services beyond retirement.  In 2002 she left government and became a full time employee of the Nelson Mandela Foundation.  She served Nelson Mandela in different capacities over nineteen years, ranging from typist, assistant private secretary, private secretary, manager of his office his spokesperson and aide-de-camp. She was serving as his personal assistant when he passed on in December 2013.

Suggested hashtag for this event for Twitter users: #LSEZelda

This event is free and open to all with no ticket required. Entry is on a first come, first served basis. For any queries see LSE Events FAQ or contact us at events@lse.ac.uk 0207 955 6043.

Media queries: please contact the Press Office if you would like to request a press seat or have a media query about this event, email LSE.Press.Events@lse.ac.uk. Please note that press seats are usually allocated at least 24 hours before each event.

From time to time there are changes to event details so we strongly recommend that if you plan to attend this event you check back on this listing on the day of the event.