is reporting that The National Center for Lesbian Rights (NCLR)  announced today that it does not support the current version of the Employment Non-Discrimination Act pending before Congress because of the bill’s religious exemption. A schism has developed amongst activists with grassroots pitted against the major organizations for months. Now while The Human Rights campaign continues to fight ferociously for ENDA’s passage, regardless of the onerous religious exemptions, NCLR has had the courage to disagree and to take the stance of grassroots activists.

“Shannon Minter, legal director for the San Francisco-based legal organization, told the Washington Blade that NCLR doesn’t support ENDA because the religious exemption is greater than it is under Title VII of the Civil Rights Act of 1964 for other classifications of people.” (The Blade)

We are proud of you for standing up to the over authoritarian HRC which thinks it owns our leadership!

Individual activists have taken the lead on this stance.  However NCLR, ACLU, TLC and other major organizations initially said they had grave concerns about ENDA’s overly onerous religious exemptions, and then seemed to pull back from their original stance, remaining silent while the Senate passed ENDA in its current form.

It has taken months and finally at least NCLR has now come out strongly against the ENDA in its current form.

HRC has taken the lead in pushing for this legislation which is half baked and does nothing more than entrench more discrimination into legislation. This is now a courageous breaking of the ranks by NCLR and much needed.

I believe the most vocal to date on this issue, and may well have impacted NCLR’s decision to come out,  have been the folks at Queer Nation,  and also Ellen Sturtz, David John Fleck, Cathy Kristofferson, Ken Kidd, Duncan Obsborne, Andrew Miller and of course Melanie Nathan. There are many others. GetEQUAL seemed fearful of taking a major stance to be truly vocal about this push to stop this awful ENDA in its tracks.

Yesterday, Meghan Stabler a board member of Human Rights Campaign (HRC) stood up for ENDA on her Facebook page and when I challenged her on the issue she suggested that I open an organization of my own if I felt that way.  I suggested to her in private and publicly that HRC consider a town hall with members of the community in a debate format with Queer Nation, to discuss the ENDA and avert the schism that is developing in our community. Queer Nation said it would love to debate the issue and HRC’s Meghan Stabler, though only a board member, did not respond.  Grassroots activists understand that Chad Griffin HRC President would be the one to respond to such a request – but he does not respond to e-mails. So why bother. I thought Meghan would be a good conduit. Perhaps not!

This is what Shannon Minton of NCLR told The Blade:

To clarify, Minter said his organization “does not support any version of ENDA that contains the current discriminatory religious exclusion.”

Here is the referenced Facebook discussion with HRC Board Member Meghan Stabler – she believes that ENDA should pass as is, even though it is fraught with unacceptable religious exemptions.  And Meghan presumed NCLR was still on board as she states in this thread. Clearly she was incorrect, demonstrating that  HRC ‘s board members do not know what other organizations are contemplating:

AND THE GRASSROOTS HIT BACK: 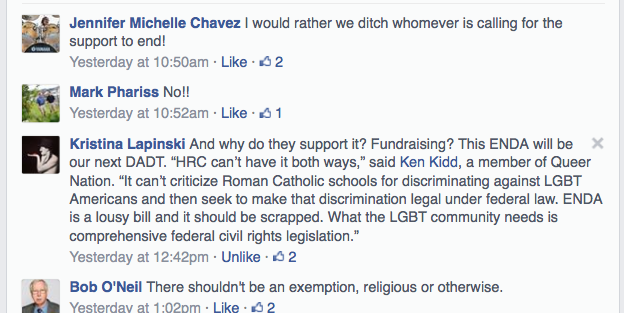 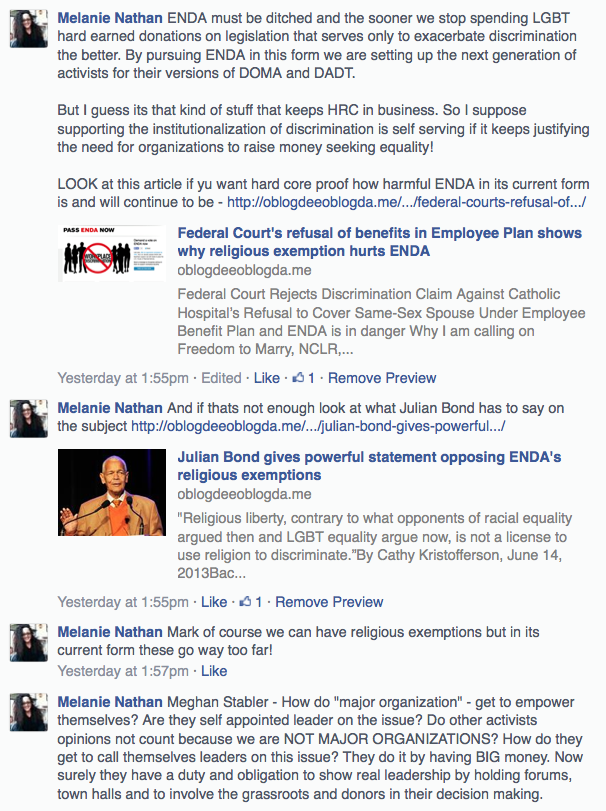 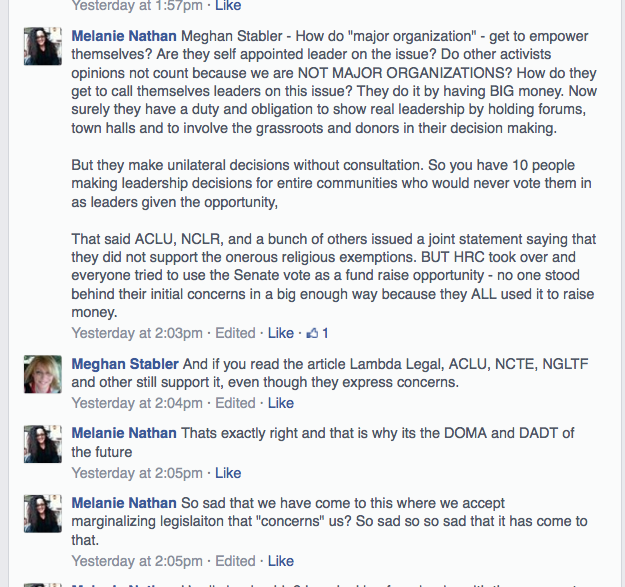 AND THEN THE INSULT INSTEAD OF DISCUSSION AND COLLABORATION :

AND THEN THE ABOVE CHALLENGE BY MELANIE ACCEPTED BY QUEER NATION:

Here are all our Advocacy articles against the current ENDA – YES we ahve been writing and protesting for months and are ecstatic to see this stand by NCLR:

THIS IS THE ARTICLE I SENT TO NCLR’s Kate Kendell early last month:

Federal Court Rejects Discrimination Claim Against Catholic Hospital’s Refusal to Cover Same-Sex Spouse Under Employee Benefit Plan and ENDA is in danger Why I am calling on Freedom to Marry, NCLR, Lambda Legal, GLAAD, ACLU, Transgender Law Center,  GetEQUAL to thwart the HRC push for Senate’s ENDA By Melanie Nathan, May 07, 2014. Although both […]

APB put out on ENDA

Boehner buries ENDA, where is the Executive Order Obama? By Cathy Kristofferson and Ellen Sturtz, November 20, 2013 After the Employment Non-Discrimination Act (ENDA) passed the Senate with bi-partisan support, all eyes turned to the House. It seems when we looked there, the Bill had been buried in four different committees and House Speaker John Boehner […]

by Cathy Kristofferson on November 5, 2013

What is the point of ENDA now? By Cathy Kristofferson, November 5, 2013 Republicans have introduced two amendments to the already highly contentious religious exemption of the Employment Non-Discrimination Act of 2013 (ENDA), further watering down the bill’s protections. With all Democrats already committed to vote Yes and only 59 votes secured, supporting Senators Claire McCaskill (D-MO) […]

Why are LGBT Organizations and Democrats Pushing for a BAD ENDA?

IS THIS JUST ABOUT DONATIONS? By Melanie Nathan, November 04, 2013. On Thursday the Senate Majority Leader Harry Reid (D-Nev.) filed cloture on the Employment Non-Discrimination Act (ENDA).  It stands before the Senate as I write. But is it right? For the past few weeks we have been bombarded with e-mails from Senators and LGBT […]

Stand up now against the ENDA Exemptions

LGBT Americans deserve full equality and yet we grapple for an unworthy ENDA? By Melanie Nathan, October 23, 2013. ENDA as it stands, introduced with exemptions in Congress, is unacceptable. That is what we have been saying here on OBLOGDEE, as certain exemptions make it unworthy of passage. That is our position. ENDA’s lack of […]

The Employment Non-Discrimination Act, or ENDA, was introduced again in Congress this year — if passed, it would make sure that no one can legally be discriminated against in the workplace for being gay or transgender. By Melanie Nathan, September 05, 2013. We all know we have a Congress that will not work with this […]

ENDA passes out of committee push underway for 60 votes

By Cathy Kristofferson, July 10, 2013 Today in a wham bam no discussion just majority and minority opening statements hearing, Senate Bill 815, the Employment Non-Discrimination Act (ENDA) was passed out of the U.S. Senate Committee on Health, Education, Labor, & Pensions (HELP) in a 15-7 vote. All Democrats voted in favor joined by 3 Republicans – […]

“Religious liberty, contrary to what opponents of racial equality argued then and LGBT equality argue now, is not a license to use religion to discriminate.” By Cathy Kristofferson, June 14, 2013 Back in April when the 2013 version of the Employment Non-Discrimination Act (ENDA) was introduced into Congress we posted here and here on OBLOGDEE […]