Why I am calling on Freedom to Marry, NCLR, Lambda Legal, GLAAD, ACLU, Transgender Law Center,  GetEQUAL to thwart the HRC push for Senate’s ENDA

Although both the federal government and the state of New York recognize same-sex marriages, and the state of New York prohibits discrimination against same-sex married couples, a federal judge in Manhattan ruled on May 1 that a woman whose Catholic hospital employer refused to enroll her wife in the employee health insurance plan could not sue under the federal employee benefits law. U.S. District Judge Nelson S. Roman granted a motion to dismiss by Empire Blue Cross Blue Shield and St. Joseph’s Medical Center.

Art Leonard, a professor at New York Law School, reports on this federal case brought by the employee of St. Joseph’s Medical Center who sued when her wife was barred from enrolling in the company’s health plan.

St. Joseph’s, a religiously-affiliated employer, does not cover same sex spouses or domestic partners. What is also notable is that Leonard speculates that ENDA might have overcome the provisions of ERISA that allowed the employer to do this EXCEPT for ENDA’s onerous religious exemptions, which we have been vehemently opposed to here on Oblogdee as can be noted from our numerous articles condemning the exemptions.

What is extremely disconcerting is that The Human Rights Campaign (HRC), a preeminent LGBTI organization, which has charged itself with a unilateral leadership role on ENDA, is now pushing for passage of the Senate passed ENDA (Employment Non-Discrimination Act) in the House. HRC is doing this despite the fact that this version of ENDA, as passed in the Senate, includes broad sweeping onerous religious exemptions, which in this example by Leonard, below, elucidates its potential for severe damage to our rights:

Leonard writes in relation to this case:

“This gap in coverage against sexual orientation discrimination might be corrected if the version of the federal Employment Non-Discrimination Act (ENDA) approved by the Senate last year were to be enacted, since ERISA does not preempt other federal statutes. Although prior versions of ENDA specifically stated that it would not require employers to provide benefits to same-sex partners of employees, and it incorporated the Defense of Marriage Act by reference, that provision was dropped from ENDA after the Supreme Court declared Section 3 of DOMA unconstitutional last year. However, ENDA broadly exempts from coverage those corporations that are deemed to be “religious employers” under Title VII of the Civil Rights Act of 1964. If St. Joseph’s Catholic affiliation would result in it been considered a “religious employer,” it would not have to comply with the non-discrimination provisions of ENDA either. Gay rights advocates have criticized this religious employer exemption as being broader than would be required by the First Amendment, but sponsors of the bill deemed it necessary to win sufficient votes for passage.”

“Our community has been fighting for decades to have ourselves and our relationships recognized as equal under the law and the religious exemption in ENDA explicitly contradicts that core principle.”

Lambda Legal, the ACLU, the National Center for Lesbian Rights, and the Transgender Law Center, all support ENDA, however when they first heard of the broad religious exemptions as now passed through the Senate, they sent out a joint Press Release in which they commented that this version of ENDA gave cause for “grave concern” because of the religious exemptions. However none of these organizations came out against ENDA after it passed the Senate and all seem to either tacitly or expressly endorse the Senate vote as a victory. They all seem to also be silent on the HRC push for ENDA in the House. This is in my opinion unconscionable.

I believe that unless the current version of the Senate’s ENDA is scrapped, we are setting up our community for further discrimination.  Art Leonard has done an excellent job of showing just one example of how institutionalized and legislated discrimination can hurt our rights, citing the Senate’s version of ENDA.  It is further arguable that some of these rights, which have already been accomplished in current case law such as the Mia Macey case, will suffer a setback if this ENDA is allowed to pass.

Unless we hear from our community – be it grassroots – individuals – academics – legal community – and especially Freedom to Marry, NCLR, Task Force, Lambda Legal, GLAAD, ACLU, GetEQUAL, Transgender Law Center, in some attempt to stop this trajectory, as spearheaded by HRC and Chad Griffin, we can expect this ENDA, if passed in this form, to be the “DADT and DOMA-eque” thorn in the side of the next generation of LGBTI activists.  PLEASE reclaim our movement from the clutches of HRC! 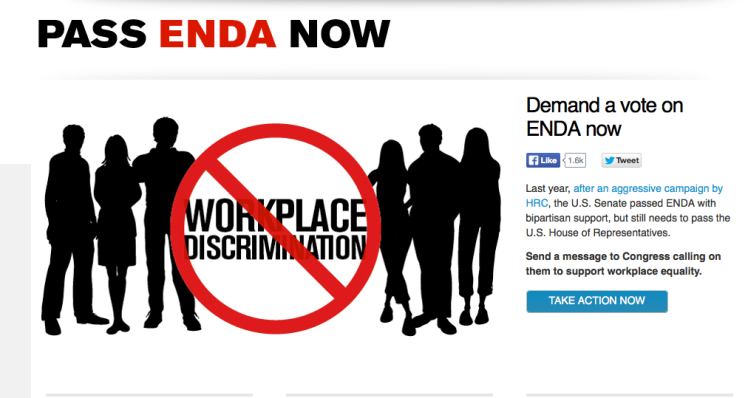