The Ugandan Ambassador to the United States, Hon Oliver Wonekha,  posted a headline and article on the Ugandan Embassy website declaring a partnership between NTA, National Tour Association, of North America, and Uganda, to boost tourism in Uganda.  The NTA has denied the partnership and issued a statement to the contrary. We will send this post to the Ambassador for her comment.

This must be an extremely embarrassing moment for the Ugandan Embassy and Ambassador Oliver Wonekha, clearly desperately trying to attract the tourism that they are losing in Uganda, because of the bad publicity Uganda has received for all its dictatorship, oppression of democratic dissent, corruption and human rights infractions, including the new Anti-Homosexuality Act. The NTA denies any partnership with the Ugandan Embassy, defying the headline posted on the U.S. Embassy website which states:

The Uganda Embassy posted this headline declaring a partnership between Uganda’s tourist industry and the 1500 member strong tour operator group NTA, National Tour Association. There is a screen shot of the post below.

I posted an article yesterday expressing shock that the NTA failed to take into consideration the Anti-Homosexuality Bill, which makes it dangerous for LGBTI or LGBTI supportive operators to travel to or conduct business in Uganda, not to mention the overt association with discrimination and the human rights abuses related to the law, which is nothing more than state institutionalized homophobia. I presumed that the Ambassadors depiction of the meeting and the resulting partnership was accurate. Who wouldn’t after all it was on an Embassy website.

The NTA responded immediately to my original article where I expressed my shock.

I received this e-mail response below from Steve Richer, the advocate for NTA who met with the ambassador:

Melanie:
Yes, I do have a reaction.

Uganda’s position as officially expressed through the “Anti-Homosexuality Act of 2014″ was mentioned in our meeting.

The release you saw was issued by Uganda without consultation or permission from NTA or me.

I have send an e-mail letter to the ambassador specifically stating that the “Anti-Homosexuality Act of 2014″ and its provisions will find NTA tour operators seeing Uganda as unwelcoming and that the only way to change this is to repeal the legislation.

NTA does not support discrimination anywhere.

Please call me to discuss this further.

I spoke to Steve Richer on the phone. Mr. Richer told me a formal statement would be sent to me from Bob Rouse at NTA. I sent out this e-mail in anticipation of the formal response:

Let me say again how grateful I am for your rapid response and the stance you take against discrimination.

Thank you also for the conversation today.

It seems that Ugandans are asserting an actual partnership took place via this header on their website – not to mention their direct quote from you:

I look forward to hearing from Bob Rouse before he submits a statement.  This is what my questions would be for coverage in a statement:

1) Does NTA deny entering into a Partnership as suggested by the Ugandan Embassy on its website per the above header?
2) Will NTA be willing to publicly warn tour operators of the dangers that the Anti-Homosexuality Act (AHA) presents to them as operators and also to their clients?
3) Is NTA willing to make a public statement condemning the AHA specifically -?
4) Will NTA be willing to go so far as to recommend /suggest that its members do not operate tours in Uganda until repeal of the AHA?

NTA does not endorse discrimination. NTA has a longstanding relationship with the LGBT community and counts the International Gay & Lesbian Travel Association as one if its strategic partners.

There is no partnership between NTA and Uganda. NTA Public Affairs Advocate Steve Richer met with the Ugandan ambassador to the United States to introduce NTA to Uganda, as travel to Africa holds interest for a number of NTA tour operators. The subsequent article quoting Richer (cited as “Reacher”) and characterizing the meeting as the initiation of a partnership was issued without NTA’s knowledge or consent.

After receiving this statement, I asked Bob Rouse to please reconsider the official NTA statement based on the questions asked in my e-mail which crossed paths. I have now challenged the NTA to be more proactive in a forthcoming statement and to take a stronger stand – to suggest to their tour operators that it is too onerous to operate tours in Uganda until the AHA is repealed.

Hey Melanie, thanks again for giving NTA the opportunity to respond. Here’s another statement from our association:

We want to reiterate and stress that NTA does not endorse discrimination. African nations, though, are of interest as destinations for a number of NTA tour operators, and the Africa Travel Association is a strategic partner for NTA (as is the International Gay & Lesbian Travel Association). It is our hope that through the intrinsic value of tourism — connecting cultures, broadening horizons and opening minds — NTA is helping to end all types of discrimination, including Uganda’s Anti-Homosexuality Act.

NTA Public Affairs Advocate Steve Richer sent a letter to the Ugandan ambassador to the United States, stating that the law “will likely be an impediment to your success with our tour operators. Per part of our conversation at your office, the recent global visibility of the ‘Anti-Homosexuality Act of 2014’ and its terms for those who violate it support the idea that Uganda is not a destination which is totally welcoming to travelers. The only way tour operators will alter this perception is when this law is eliminated.”

I am grateful that the NTA did inform the Ambassador that the onerous Anti-Homosexuality Act of Uganda makes travel undesirable to Uganda, and while we can only hope for NTA to take a more assertive and  stronger stand, I am reminded how MP David Bahati, the Ugandan parliamentarian, who authored and introduced the Kill the Gays Bill in Uganda, told me back in 2011, that if the Bill passed, Ugandans would not be concerned about its impact on tourism. He boasted that Uganda was touted as one of the world’s top tourists destinations, and so he was convinced that his Bill would be of no effect on tourism. He was dead wrong.

I think Bahati may be in for a shock as this story will make its way to the Ugandan Press.  This must be seen as a disingenuous and desperate move by Hon. Oliver Wonekha, Uganda’s Ambassador to the United States, in her misrepresentation (dare I say lie) that there is in fact a partnership with NTA.

This must serve only to further embarrass Uganda, while shedding light on the fact that Uganda does not get to play the hypocritical game, asserting “we have a sovereign right to make laws that persecute LGBTI people – leave us alone,” while lying their way into having the world believe that we are scrambling to boost their tourism industry.

Here are screenshots of the emails: 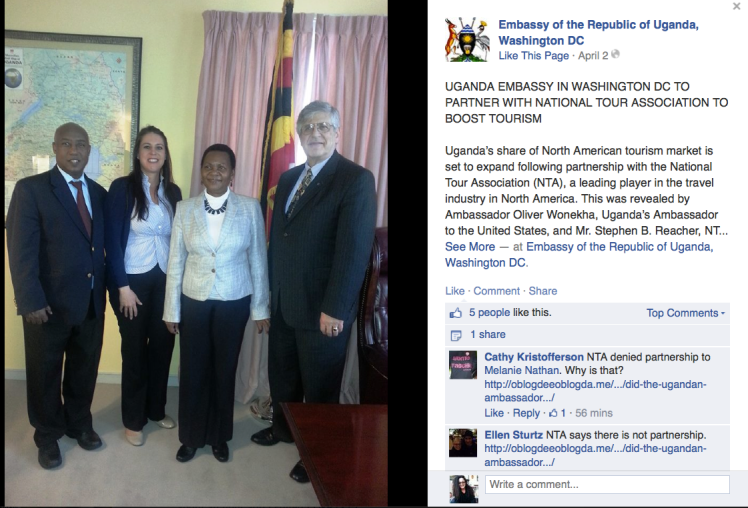 My original article expressing shock at the NTA
http://oblogdeeoblogda.me/2014/04/23/anti-gay-ugandas-ambassador-partners-with-national-tourism-association-nta-in-u-s-a/