For Global Day Against Homophobia 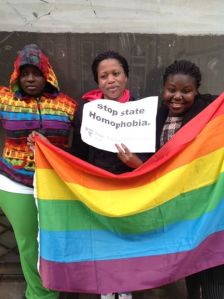 On the 20th March  the world will protest homophobia and Uganda Gay On Move (UGOM), a community in the Diaspora, is scheduling a demonstration in Amsterdam, for the world global day of action against homophobia and laws that violate human dignity.

The recently enacted laws in Nigeria and Uganda are a violation of their respective Constitutions and the United Nations Charter on Human Rights, in respect of which Uganda and Nigeria are signatories, and as such, should be challenged and repealed forthwith.

The violations include discrimination against LGBTI people as well as are the harsh penalties which jail LGBTI persons for for homosexuality, as well as punitive measures for the so called promotion of homosexuality. Already people in  Igeria have been subjected to public flogging. The law seems to provide a tacit license to people to commit so called mob vengeance and has resulted in personal public outings as well as physical attacks on LGBT people in both countries.

“on such grounds  UGOM is coming out to join the rest of the world in protest against this injustice portrayed under these new laws and advocate for their repeal.Other penal codes that are in relation to this new law should also be part of this agenda. For example the Ugandan constitution has a penal code 120 that was annexed from the British colonial laws that governed the land and it is still in existence only to be strengthened under the new law. In this demonstration we want to strongly send a signal back home that the journey to our freedom is now. We are going to do what it takes for our rights because it’s our right to love whom we want.

It is really a sad moment for the whole world and it is high time the international community isolate Uganda and Nigeria by putting travel bans to countries that respect LGBTI rights like the EU, USA, Canada, among others to all those that got involved in making these laws success be it government officials, public figures and individuals.

Please let us know if you will be attending a protest anywhere in the world.

Ask yourself what you are doing to fight homophobia this month?

This Saturday at 2:00pm in Knoxville, TN there will be a Rally in support of LGBT PEOPLE FROM UGANDA & NIGERIA. They are asking the US for immediate asylum so they can escape the new anti-LGBT laws adopted in their countries recently. Many are on the run and in hiding. HIV/AIDS services are being greatly hampered by this situation. Public whippings, beatings and burnings are taking place as ignorance and homophobia takes hold.
The RALLY will be at TVUUC 2931 Kingston Pike. Please plan to attend. Music, speakers and refreshments.