NIGERIAN LGBTIs IN DIASPORA  IN LONDON WILL PROTEST AGAINST ANTI-SAME SEX LAWS | Love Not Hate! 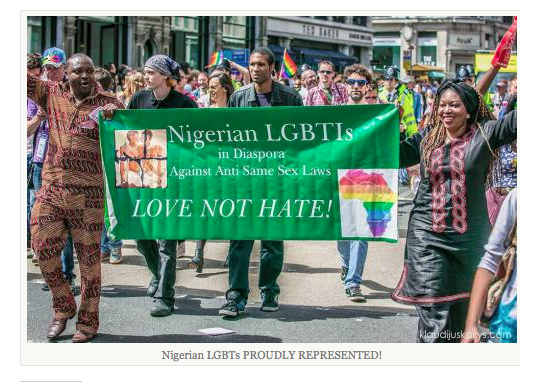 “We will come together to say NO to this atrocious law and its blatant violation of our human rights.”

We will also deliver a protest letter to the Nigerian High Commissioner.

In the spirit of Love that February is famous for, we shall host a kissing spree outside the embassy as we say Yes to Love and No to Hate. Nigerian LGBTIs and allies will hold hands, hug and kiss outside the Embassy.

Join us in solidarity. Love Not Hate!

You can also link to our event on Facebook.

URGENTLY Calling on HRC, NCLR, Get EQUAL and Other U.S.A. Organizations to Start Preparing Now to Form a Coalition to Rally for Nigeria

Nigeria’s LGBT community, through The Solitary Alliance, is calling on the world to help protest against the anti-gay law that has caused major persecution and mob injustice against gays and lesbians in Nigeria. I wrote to all our USA group back on January 13 asking for noise and 2 groups out of the 8 responded saying that they were waiting to hear from Nigeria’s LGBT community first, I think in the case of Nigeria that was a big mistake and one that could also hurt Ugandan gays – which is waiting to see if Museveni will sign his assent to its pending Anti-gay Bill. READ MORE