While athletes, and the world celebrate Sochi together with Valdimir Putin, Russian Teens are at great risk. These current charges show just how bad the new Anti-gay law is in Russia. These laws, now operative, are causing direct harm to LGBT teens that result in greater risk of suicide, without the imperative support of the Children-404 project and because of the persecution encouraged by government.

Lena Klimova, the founder and chair of the “Children-404” project, is accused of violating Russia’s “homosexual propaganda” ban.  Kilmova is being charged because she created an online support community for at risk Russian LGBT teenagers. The case is based on a complaint from Vitaly Milonov, member of the St. Petersburg legislative assembly who sponsored the “propaganda” ban. Milonov is seeking to fine Klimova and to close down the project.

On January 17 Klimova was summoned to a local police station in her home city of NizhnyTagil to answer Milonov’s complaint against her. She was summoned a second time and served with an infringement notice. 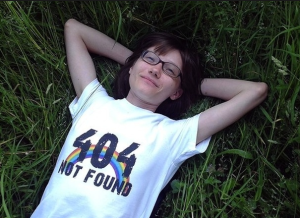 Investigators accuse Kilmova of violating federal law “On protection of children from information harmful to their health and development”. In their opinion, Ms. Klimova committed an administrative offense as described in p. 2 Art. 6.21 of the Administrative Offences Code of the Russian Federation which forbids “propaganda of non-traditional sexual relations.”

The court hearings are to take place in 15-30 days.

Lena Klimova, a journalist from the city of Nizhny Tagil in the Urals, established the online community “Children-404” in March 2013. The project came to exist after she published an article about LGBT teenagers’ problems and began receiving constant messages from needy teenagers. These letters represent the problems and challenges suffered by the teenagers who share their personal and often very sad stories, where they reveal bullying by peers and misunderstanding by parents. These are posted on the project’s wall. At present, more than one thousand letters have been published.

“In light of general trends in the country, I am not surprised. But it is very sad that letters from LGBT teenagers themselves are called “homosexual propaganda among minors”. It is absurd! Milonov, the complaint initiator, has two demands: to fine me and to close the group. If it will be closed, LGBT teenagers will lose the only place where they can openly speak about themselves and receive advice they need to live. It will be a catastrophe,” says Lena Klimova.

The Straight Alliance for LGBT Equality is supporting “Children-404” as a partner project and because of the project leader persecution, have begun  an open campaign to protect Russian LGBT teenagers and the “Children-404” project. They are calling upon communities and all people of good will to join them and to demand. the state-sponsored bullying of teenagers.

The Russian law declared LGBT teenagers and adults “socially unequal”. Any support to LGBT teenagers is now against the law.  The Alliance notes that:

“They can’t be told the truth that they are normal. And now the state wants to shut their own mouths – to declare teenagers’ letters criminal. And this is while Russia keeps the 1st place in Europe in teenage suicides. The state has initiated a targeted bullying of LGBT teenagers which threatens their lives, pushes them to suicide.”

“At least one third of LGBT teenager in Russia have thought about suicide, and at least every fifth has tried to commit suicide at least once,” says Lena Klimova. “As reason for suicidal thoughts, teenagers name internal homophobia, physical and psychological abuse (including outing) from relatives and acquaintances. Most often suicidal thoughts arise if a teenager is lonely and has nobody to talk to and to trust. On the contrary, those with reliable friends or accepting parents almost never think about suicide”, says Klimova. (The data is based on a survey of 293 teenagers that Lena Klimova conducted in July 2013.)

A petition has been organized for the Children-404 project:
http://chn.ge/1fQjsoQ