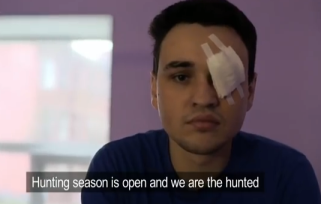 Channel 4 and BBC TV went to Russia  and did an in depth documentary on what life is really like being Gay in Russia.

Will those crowds sitting cheering on the stands of SOCHI say “we did not know?”  Will Johny Weir, Billie Jean King, Brian Boitano, our very own LGBT community members continue to turn their backs using fluffy inexcusable rhetoric, “we will wave our Rainbow Flag” as their ongoing excuse for ignoring the harsh reality and what really should be said and done?  Will NBC and Matt Lauer continue their shameless silence with a “‘rah-rah’ we love the non-political games?” And what about the International Olympic Committee (IOC) and the athletes and the coaches and the teams – how do you feel about participating in Valdimir Hitler Putin’s games? And as for VISA, Coca Cola et al- well you know what is going on and yet you take us so proudly to Sochi and ask for our support and even HRC, Human Rights Campaign, the preeminent and largest U.S. Gay organization continues its support for you, by serving up the COLA at its latest event.

And at the end of the games Putin will smile and say “look we tolerated you gays – and thank you for helping us tout our successful games and now you f’ing faggots, get your arses back to the West, you do not belong in Russia;” and indeed the minute the world leaves, new laws will be introduced to take children away from their gay and lesbian parents!

We have been reporting on these vigilante groups and the hunt of gays for months here on OBLOGDEE (See below) – and of course the mainstream, has been slow to trot – and such is denial and the quest for the almighty buck as the world spread the word “The games must continue in Sochi!”

Lest we forget how during the Nazi era, the plight of the Jews spent years in tiny unnoticed print on page 6 of the New York Times, column 4. The world is doing it again and I believe most of you who are reading this are complicit in your silence.

If you are not afraid of the truth then watch this MUST see  BBC Channel 4 report and share it with anyone who thought that instead of boycotting SOCHI Winter Olympics we should show up with rainbow flags:

SEE MORE EXPLICIT VIGILANTE REPORTS ON OBLOGDEE and  the comments of Russians who came onto our site to try and justify these actions:

UPDATED 2/11/2014: Since reporting this the Video by Channel 4 has been removed – here is a place where similar reports on the same topic can be found- http://www.youtube.com/results?search_query=Channel%204%20Russia%20Vigilante%20gay&sm=3

UPDATED HERE IS A VIDEO THAT IS STILL UP ON YOU TUBE BY BBC:

The aim of the new Russian Anti-Propaganda law is to cleanse Russia of gays says this lawmaker.

By Melanie Nathan, January 18, 2014. Russian white supremacist, Neo Nazi, Ultra Nationalist and Gay basher Maxim Martsinkevich has been arrested in Cuba in an international arrest warrant, Russian police reported today, according to media reports. Russia was informed by Cuban police of the arrest of Martsinkevich, otherwise known as Tesak,  through Interpol, the Russian Interior Ministry […]

Judging by the accusations of two new victims, it would seem that Martsinkevich himself has been sexually aroused by these encounters. By Melanie Nathan, November 11, 2013. We recently featured a story here on OBLOGDEE naming Maxim Martsinkevich, also known as “Tesak”,  as WANTED – using the instance of kidnappings and assaults of young gay […]

SA student perceived as Gay tortured by Russian gangsters known as Occupy Pedophile who are given Impunity by Vladimir Putin and his homophobic regime #WANTED Let us #OUT these criminals so the world knows who they are. By Spreading this Article around we are showing the faces of the cowardly Russian criminals who lure and […]

By Melanie Nathan, November 05, 2013. We have been reporting for some time the attacks of young people, including students, who are lured through the internet, by anti-LGBT, neo-Nazi and ultra-nationalists groups in Russia. We have also been reporting that these groups have gained strength and increased their attacks on young gay (LGBT) people or […]

10 ways to STOP the Russian terror of Gays By Melanie Nathan, July 26, 2013. Anti-gay sentiment and violence against LGBTI people has been a Russian habit for some time. However in recent months it has escalated with lack of basic law and order, exacerbated by Vladamir Putin’s legislative onslaught through various laws that criminalize […]

The Most Poorly Timed Social Media Post of All Time! By Melanie Nathan, January, 2014. Coca-Cola is not only a sponsor of the Putin Sochi Games, in homophobic Russia, but has now had the audacity to post ad on Facbook using an equality, love and happiness themed song. The LGBT community around the world is […]

The road to SOCHI is paved with Coke Cans – from Hypocrisy to Blood-money #shareacoke and Join the Anti-Coke revolution By Melanie Nathan, January 27, 2014. Coca Cola has a message for you – Let us share a Coke as long as it is not with Russian Gays, Ugandan Gays, Nigerian Gays, Gambian Gays, Zimbabwean […]