While the kidnapping, torture and outing of young gays continue with public endorsement in Russia through the tacit license of anti-gay laws | And even if we are assured of the safety of our athletes, are we willing to leave Sochi, after a “successful games” only to know that this persecution will continue for LGBT Russians?

This week I heard the Press Secretary for President Obama, Jay Carney,  deflect a question about the out and out call for boycotting Russia’s Sochi Games. Carney repeated the President’s position, noting that he is sure “Russia will do everything to ensure that the Olympics are a success.”  But really, I would ask the President the obvious question – when it comes to the plight of LGBT Russians surely it is not all about the ‘Olympics being a safe place for athletes’ for the duration of the Games and more about the moral question of whether or not we should participate in the games at all.

The White House has yet to deal directly with that question, even though the President did say he has no patience for such laws and treatment of gays.

So how does a successful Olympics help change the law for LGBT Russia? Of course it does not.  By participating even with the temporary suspension of the anti-gay laws or asking for special treatment of American gays, we are in essence endorsing the laws against the LGBT community when we leave.

It is imperative that alll the LGBT groups in the U.S.A., including the Human Rights Campaign, urge the White House and the membership of their organizations to call for an all out boycott of the Winter Olympics, unless the games are moved from Sochi, Russia. Anything short of that will be tantamount to reliving our shameful participation in the 1936 Hitler Olympics.  The scapegoating laws now in place in the Russian legislation are no different from those laws that started scapegoating Jews in Nazi Germany.

NBC Universal Studios, which will officially broadcast the event should hear that if they broadcast from Russia, we will be turning our TV’s to other channels. This is their flimsy response to the questions about Sochi. Perhaps someone can inform NBC that this is the very same spirit expressed in 1936. Surely NBC should look at the fact that the IOC is failing to adhere to the rules outlined in its own charter and that they should take a much stronger stand on the issue:

And HRC,  led by Chad Griffin, notes this inability to support a full boycott with an ineffective and flimsy call out:

“HRC President Chad Griffin wrote to NBC Universal executives, asking the network to use its exclusive coverage of the 2014 Olympic Games to expose this heinous law.  He also called on the International Olympic Committee (IOC) not to be credulous, after the organization announced it had received promises that foreigners would not be subject to the law during the Sochi Games:

“Mere verbal assurances from the Russian government that foreigners will be exempt from their repressive laws are not enough. The IOC must obtain ironclad written assurance from President Putin. But more importantly, they should be advocating for the safety of all LGBT people in Russia, not simply those visiting for the Olympics. Rescinding this heinous law must be our collective goal.”

It seems that the White House and HRC may not be asking the big question – “What will happen after we leave the Games” and nor are we hearing about any future advocacy strategy to follow?

And shame on American and World leadership which cannot take the ultimate stand, such as asked for by Stephen Fry in his moving letter to Prime Minister Cameron:

“An absolute ban on the Russian Winter Olympics of 2014 on Sochi is simply essential. Stage them elsewhere in Utah, Lillyhammer, anywhere you like. At all costs Putin cannot be seen to have the approval of the civilised world.”

I write in the earnest hope that all those with a love of sport and the Olympic spirit will consider the stain on the Five Rings that occurred when the 1936 Berlin Olympics proceeded under the exultant aegis of a tyrant who had passed into law, two years earlier, an act which singled out for special persecution a minority whose only crime was the accident of their birth. In his case he banned Jews from academic tenure or public office, he made sure that the police turned a blind eye to any beatings, thefts or humiliations afflicted on them, he burned and banned books written by them. He claimed they “polluted” the purity and tradition of what it was to be German, that they were a threat to the state, to the children and the future of the Reich. He blamed them simultaneously for the mutually exclusive crimes of Communism and for the controlling of international capital and banks. He blamed them for ruining the culture with their liberalism and difference. The Olympic movement at that time paid precisely no attention to this evil and proceeded with the notorious Berlin Olympiad, which provided a stage for a gleeful Führer and only increased his status at home and abroad. It gave him confidence. All historians are agreed on that. What he did with that confidence we all know.

Putin is eerily repeating this insane crime, only this time against LGBT Russians. Beatings, murders and humiliations are ignored by the police. Any defence or sane discussion of homosexuality is against the law. Any statement, for example, that Tchaikovsky was gay and that his art and life reflects this sexuality and are an inspiration to other gay artists would be punishable by imprisonment. It is simply not enough to say that gay Olympians may or may not be safe in their village. The IOC absolutely must take a firm stance on behalf of the shared humanity it is supposed to represent against the barbaric, fascist law that Putin has pushed through the Duma. Let us not forget that Olympic events used not only to be athletic, they used to include cultural competitions. Let us realise that in fact, sport is cultural. It does not exist in a bubble outside society or politics. The idea that sport and politics don’t connect is worse than disingenuous, worse than stupid. It is wickedly, willfully wrong. Everyone knows politics interconnects with everything for “politics” is simply the Greek for “to do with the people”.

The elephant in the room – In good conscience, how will we as an international community compete and then leave; will we simply walk away knowing we contributed to a “successful Russian Olympics”  while knowing this will continue in Russia?  –

While I am loathe to expose this young man any further, but this must be shown. It is apparent that the harm depicted in this video has already been done. It has been a big decision for me to re-post this here on this blog, however this is already all over Facebook, You Tube and social media. Now it is time to let people know that the White House,  Human Rights Campaign are aware of these atrocities and they have yet to call for a full boycott of SOCHI GAMES?

This is what is going on Russia.  I am posting it as an adjunct to our call for a full and absolute boycott of Russia as well as the Winter Olympics in Sochi.

After seeing this and noting the new anti-gay laws in Russia, which seem to give license to this lawless behavior, how can America, in good conscience, send a team of athletes to participate in this country that is allowing such persecution, unfettered. 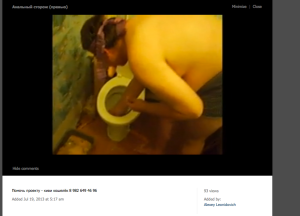 You will note in the video how people walk by in the street and the perpetrators continue to taunt their victim without any worry of repercussion.  We have had reports that suicides of these young victims are not uncommon. I have heard that the number exceeds 450 in less than two years. This number remains unverified. This is horrifying and we cannot be silent. Putin and his regime are complicit and we cannot allow this continue.

Despite a worldwide outcry, Putin’s government and law enforcement has done nothing so far to stop the infamous Neo Nazi gang  ( Ultra-Nationalists)  and their “Occupy Pedofilyaj”/”Occupy Gerontofilyaj” movements.

The latest video was posted by a gang branch in Lipetsk on August 7, 2013.  Again, one of the perpetrators used the popular Russian social network VK.com to publicize these atrocities (Archived version of his page). One does not have to know Russian to observe numerous Nazi symbols on this profile page and the author’s fascination with Hitler and Nazi Germany.

As usual the video clip features a young 17 years old boy captured by the gang using a fake personal ad, allegedly from a 22 years old man. The age of consent is 16 in Russia thus it is not illegal for a 17 years old to enter into the relationship with an older person.  During the course of the video the victim is outed to the entire world while being forced to state his full name, address and place of employment. They even made the teen to place a phone call to his employer, Svetlana, who stated that she was ashamed with him and “he should be punished.” There is a monetary reward for those gang members who would re-post this video on their VK.com pages and groups.

Following the twisted homophobic logic widely adopted in Russia, the tormentors made an attempt to “cure” the victim from being gay, since they believe that he would become a pedophile in the nearest future unless he denounced his life style and becomes 100% heterosexual. Criminal statistics that shows no correlation between gays and crimes associated with pedophilia are conveniently ignored in Putin’s Russia and unknown to the general public.

As of August 8, 2013 there are 437 Neo Nazi “Occupy Pedophilyaj” groups registered on the popular Russian social network VK.com.  No attempts have been made by law enforcement to shut them down. This analog of Facebook is widely spread among Russian teens since they allow illegal content sharing unlike the American counterpart. It has been reported by our trusted sources that VK.com owner, Pavel Durov, resides in the US and provided no comments so far. Also, VK.com servers are also located in the US. Hosting providers have not returned any comments either.

At this time international community should make every effort to stop this atrocities and sanction Russia by boycotting the upcoming Winter Olympic Games in Sochi and all Russian goods.

AMERICA DO YOU WANT TO SEND YOUR ATHLETES INTO THIS?

Below is the Photo of proud Ultra-Nationalist, boasting about his gay witch-hunts.

And even if we are assured of the safety of our athletes, are we willing to leave Sochi, after a “successful games” only to know that this persecution will continue for LGBT Russians?

Leaders of Ultra-Nationalist groups roam free to torture gays and then they boast about it online. How does Putin plan to guarantee protection of foreign Gays with maniacs like this roaming free with license to continue his gay witch hunt. These people know they are above the law and hence not afraid to have their names and pictures associated with the kidnappings and tortures of young gay men.  The on line evidence is widespread and there have been no arrests or repercussions? The Government is complicit and has provided license for these atrocities through legislation that serves to endorse the lies and myths about gay people, misleading Russians about Gays, while cutting off discussions and education to present the truth through so called anti-propaganda laws.

Until such time as the Russian DUMA (Parliament) rescinds the anti-gay-anti-propaganda law which is causing detentions, homophobic violence and the persecution of LGBTI Russians and allies.