“The Rainbow Flag is the international symbol of LGBT freedom — it is not an endorsement of repression.” Gilbert Baker 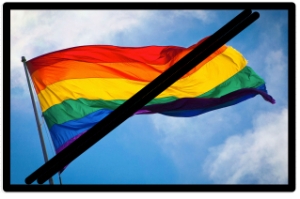 We have have written numerous articles on this website calling for a full boycott of Russia due to their legislated persecution of LGBT people. To all of you who have critiqued our stand for a FULL and absolute all out boycott of the  Winter Olympic Games at Sochi, Russia, with your feeble suggestions that our U.S. and world athletes should attend so we can wave our rainbow flags and wear rainbow wrist bands – please note that the creator of the Rainbow Gay Flag says “NO!”

Gilbert Baker, the creator of the Rainbow Flag and a member of Queer Nation made the following statement to New York Times columnist Frank Bruni: “Olympic flag waving gave a stamp of approval to Nazi atrocities in 1936. Please don’t use the Rainbow Flag to cover up Russian atrocities in 2014. The Rainbow Flag is the international symbol of LGBT freedom — it is not an endorsement of repression.”

In an August 5 opinion piece opposing a boycott of the 2014 Winter Olympic Games in Sochi, New York Times columnist, Frank Bruni, imagined U.S. Olympic athletes waving Rainbow Flags “no bigger than a handkerchief” during the event’s opening ceremony in Russia as a gesture in opposition to Russia’s recently enacted anti-gay law that makes any pro-gay statement or demonstration in public and on the Internet a crime.

The Olympic Games were held in Nazi Germany in 1936 and other nations, especially the United States, hotly debated whether they should participate. There were also debates in Great Britain, France, Sweden, Czechoslovakia, and the Netherlands. Ultimately, more nations participated in the 1936 Olympics, than in any prior games. The Nazis went on to kill six million Jews in the Holocaust, an estimated 100,000 LGBT people, the Roma people, and political dissidents.

Baker first raised the Rainbow Flag, with its iconic eight colors, at San Francisco Pride in 1978. Its positive visual and visceral message of hope, love, and liberation, was meant to transcend all languages and national boundaries. The flag has since become the internationally recognized symbol of the LGBT community’s struggle for freedom.

Queer Nation is a direct action group dedicated to ending discrimination, violence and repression against the LGBT community. The group’s website is www.QueerNationNY.org and they may be found on Twitter @QueerNationNY.

I agree wholeheartedly and have used my experience as a South African during the height of apartheid to endorse and support a full and all out boycott of the games at Sochi. The International  Olympic Committee should either remove the games from Sochi or expect athletes not to show up at all.  Showing up to wave rainbow flags is laughable and I have been fighting this suggesiton on Facebook for weeks. The only way Putin will get it is if we cancel, move the games and exclude Russia. That is unless Putin revoked the anti-gay laws immediately, of course.

If America shows up, then we are endorsing Putin’s anti-gay laws and providing license for more atrocities. The Nazi example is poignant and perfectly in point. If the IOC will not pull the Games from Russian, then we must target ALL the sponsors of the Sochi Games and tell them to pull their support immediately. Come on LGBT America and LGBT World and allies – – time to flex our real muscle.

Until such time as the Russian DUMA (Parliament) rescinds the anti-gay-anti-propaganda law which is causing detentions, homophobic violence and the persecution of LGBTI Russians and allies.

UPDATE: SEE WHAT HAPPENS WHEN YOU WAVE A RAINBOW FLAG OF FREEDOM IN RUSSIA

See the video below of what happens when you unfurl a Rainbow flag in Russia. You are beaten and detained. Here is the evidence. Then ask yourself – if our athletes and visitors attended the Sochi Games and defied Russia’s law, of so called gay propaganda, which includes the unfurling of rainbow flags, and if they are given protection and not detained as the Russians were in this video – would we be okay with being treated as the exception? Would we want to contribute to being the exception while Russian continued to suffer this? All the while contributing our money to Russia’s homophobic economy? I hardly think so! So our Human Rights Campaign, U.S. Congress, State Sec Kerry and President Obama should not be calling for safety or special treatment of American athletes but rather for the removal of the Sochi Games to another venue. – Please ensure we do not go to SOCHI.