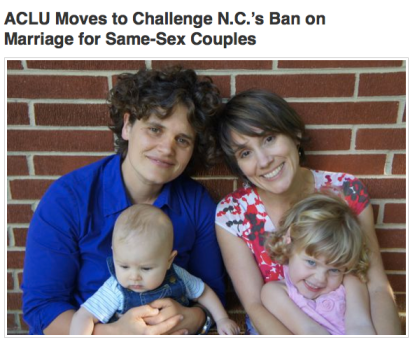 Today the American Civil Liberties Union (ACLU) and the ACLU of North Carolina Legal Foundation (ACLU-NCLF) announced plans to challenge North Carolina’s ban on marriage for same-sex couples by amending a federal lawsuit filed against the state last year on behalf of six same-sex couples and their children that challenges North Carolina’s ban on second parent adoptions. The announcement comes on the same day that the ACLU has filed a federal challenge to Pennsylvania’s marriage ban and the ACLU and Lambda Legal have announced a challenge to Virginia’s marriage ban.

The ACLU is asking North Carolina Attorney General Roy Cooper to agree to allow an additional claim challenging the state’s ban on marriage for same-sex couples to be added to Fisher-Borne v. Smith, a lawsuit filed last year in Greensboro in the U.S. District Court for the Middle District of North Carolina that challenges the state’s ban on second parent adoption, a process by which one partner in an unmarried gay or straight couple adopts the other partner’s biological or adoptive child. If the Attorney General’s office does not agree to the addition of the new claim, the ACLU will petition the court to allow the claim to be added.

Marcie and Chantelle Fisher-Borne (pictured), one of the couples in the case, have been together for 16 years and live in Durham. Each woman carried one of their two children — a 5-year-old girl and a 1-year-old boy. They had a wedding in North Carolina 10 years ago and were legally married in Washington, D.C. in 2011, but their marriage is not recognized by North Carolina law. When their daughter was born, the couple met resistance from a hospital staff member who demanded their legal paperwork. If they were legally married in North Carolina, their family would be respected and such encounters could be avoided.

“Our children have two parents who love them dearly.  Like any parents, we want to be able to do everything we can to care for our children.  Our children deserve the security of having both Marcie and me as legally recognized parents, and marriage is the best way for us to provide that to them,” said Chantelle Fisher-Borne. “We declared our love and commitment to each other years ago, but the law in North Carolina does not recognize the life we have built together or allow us to share legal responsibility for the children we have raised together. We want to be married for many of the same reasons anyone else does – to do what’s best for our family, especially our children, and have our commitment to each other recognized by the law.”

Marriage would help same-sex couples protect their children by ensuring that all children in the family are covered if one partner lacks health insurance, that families will stay together and children will not be torn from the only home they’ve known if something should happen to the biological or legally recognized parent, and that either parent will be allowed to make medical decisions or be able to be by their child’s bedside if one of their children is hospitalized.

“The past year has witnessed a sea change in the quest to secure the freedom to marry for all committed couples across the nation and in North Carolina,” said Chris Brook, Legal Director of the ACLU-NCLF. “From President Obama and Senator Hagan’s endorsements to the recent landmark Supreme Court decision declaring the so-called Defense of Marriage Act unconstitutional, support for the freedom to marry has moved forward by leaps and bounds.  Conversations are happening at dinner tables throughout our state with more and more North Carolinians agreeing that the rights and responsibilities that come with marriage should not be denied to loving and committed couples simply because they are gay or lesbian. Our announcement today is the next step in that conversation.”

The move to amend the North Carolina lawsuit comes less than two weeks after the U.S. Supreme Court’s landmark ruling in another ACLU case, United States v. Windsor, which found that the federal Defense of Marriage Act defining marriage as between one man and one woman was unconstitutional.

“Under DOMA, same-sex married couples have their lives burdened, by reason of government decree, in visible and public ways,” Justice Anthony Kennedy wrote for the majority in Windsor, adding that creating a “second-tier” status for same-sex couples “demeans the couple, whose moral and sexual choices the Constitution protects … [a]nd it humiliates tens of thousands of children now being raised by same-sex couples. The law in questions makes it even more difficult for the children to understand the integrity and closeness of their own family and its concord with other families in their community and in their daily lives.”

More information about the families involved in the lawsuit can be found at http://www.aclu.org/second-parent-adoption-nc