Porterville City Council, the only city council in all of California to declare its support for the anti-gay Proposition 8 in 2008, is now threatening to rescind a proclamation signed by its Mayor, who had declared June to be LGBT Pride Month in Porterville.

On June 04, despite heated debate, expressions of extreme hate, citing biblical references by community, as well as the vehement opposition from the City Council, and threats of a recall, Mayor Virginia Gurolla exercised her authority and remained committed to the signing of the proclamation. 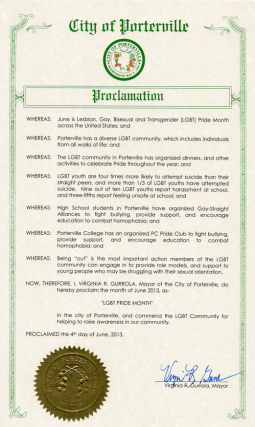 We first reported the story here on OBLOGDEE:

“It has been a long dirty battle between the LGBTQ community,  some choice government officials and residents of the town of Porterville, California, culminating in tonight’s City Hall showdown, where Mayor Virginia Gurolla issued a proclamation recognizing the LGBTQ community, despite the objections of all her City Council members and a large hall of community members.  And the fallout?  Death threats by religious bible punchers against the LGBT community.”

LGBT activist from Porterville and around the country have sent notes thanking the Mayor for her courage in the face of the threats of recall and severe opposition.

But now the City Council has placed the rescission of the Proclamation on its agenda for the next City Council meeting scheduled for Tuesday evening, June 18th, citing an alternate cause for the month of June:

“Council Member Requested Agenda Item – Request for the City Council to Consider Rescinding the City Proclamation of “Gay Pride Month” for June 2013, and Adopt a  of Support for June 2013 as “A Month of Community Charity and Goodwill to All in Porterville” Re: Consideration of Council Member Ward’s request for an agenda item on the next regular meeting for the consideration of rescinding a proclamation and adopting a resolution“

How can the City expect any ‘goodwill to all,’ when they have displayed such disgusting disdain and hate for their LGBT residents, as was evident on June 04, now extending to the further expression of ill-will by requesting a rescission of the proclamation.

“The City of Porterville is doing a great disservice to the lgbtq community. It is unjust. I am outraged they are using their political power to bully us and inflict their personal beliefs into City politics.”

Surely the ‘goodwill to all’ will only be evidenced by allowing the Proclamation to stand as is.  If anything the LGBT community is owed an apology by the City Council for the hateful treatment at the hands of those attending the meeting and the extended threats since. How would it hurt to have “A Month of Community Charity and Goodwill to All in Porterville” scheduled for a different month rather than June?

Surely no one will be duped and stupid enough into thinking that “A Month of Community Charity and Goodwill to All in Porterville” remedies this situation and surely it is obvious that it does not include the gay community, given that so much hate was spewed by the rest of Porterville in attendance?

What the citizens of Porterville do not realize is that its LGBT community has suffered enough prejudice and discrimination under the law and the recognition of a month of Pride provides respite from the marginalization endured by this oppressed minority. “Goodwill to All” hardly captures that need, especially in the context of the hate displayed by residents and City Council alike.

And now Porterville is set to make a further clown of itself by opening the stage to even more hate and rhetoric under the guise of “A Month of Community Charity and Goodwill to All in Porterville.”

So NO!  Porterville, it is too late. The Mayor has already proclaimed June LGBT Month – and those of you still fighting to reverse that ought to be ashamed of setting your LGBT community up for more verbal assaults, beyond that which already occurred on June 04.

If Porterville allows itself to reverse the proclamation they will be signing on to the hate and rhetoric as expressed by the likes of Porterville resident, Kenneth Avila- (Video Below) who misquotes the Bible in his argument and believes gays should be put to death, or people like Kathlyn Avila who said that people who say that God loves everyone have not read the Bible.  (see http://www.youtube.com/watch?v=j-e_bU2HuNo)

An added note: It is yet unknown if the City Council even has the authority to rescind the proclamation and the City Lawyer, a known conservative, is expected to weigh in on or before Tuesday’s meeting.

VIDEO: Here is one reprehensible example of such hate and call for death to gays as spewed by Kenneth Avila at the June 04 meeting. One can only assume that in calling for the reversal of the proclamation the City Council is in agreement with Avila’s point of view. If not, they should allow the Proclamation to stand as a statement against such hate:

NOTE: After the June 04 meeting apparently Avila was arrested outside the meeting because he refused to move after being ordered by Police to do so. He has been known to flaunt the same signage and rhetoric used by the Westboro Baptist Church  when touting his anti-gay rhetoric – yet in a comment on our prior post, WBC seems to want to distance themselves from Avila being considered a member of their hate group.  See ARTICLE BELOW

Here is the Facebook comment where Avila brags about calling for the death of gays at the June o4 meeting:

By the way Porterville City Council, this is the Facebook message left by Mr. Avila for the Mayor- And let me be clear if you rescind the proclamation this is what you are supporting: (The offensive You Tube Video was removed by You Tube)

Here is AVILA’s FB page which hopefully will be down by the time you read this. If not please join in the complaints to get his hate off Facebook –
https://www.facebook.com/Yourboyken