Revamping the dream for an all inclusive politicized Pride 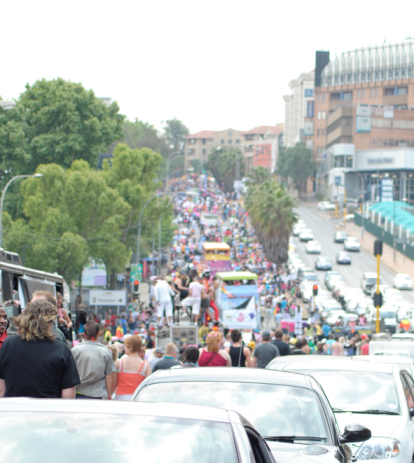 This Press Release passed our desk, in what seems to be a follow up to the very controversial events surrounding Johannesburg Pride over this past year and its subsequent cancellation:

A meeting on 18 May of the recently formed organising committee of about 30 individuals decided on a broad programme of action for the annual lesbian, gay, bisexual, transgender, intersex, asexual, and queer (LGBTIAQ) Pride in Johannesburg.

Johannesburg Pride 2013 will consist of public art installations, performances, exhibitions, direct action, workshops, and debates over the months leading up to a march on October 5.

The organising committee emerges from two public meetings hosted by the Forum for the Empowerment of Women (FEW) and the One in Nine Campaign during April and May 2013, attended by a broad range of activists and other members of the Johannesburg queer public.

The meetings discussed issues concerning the manner in which Pride has been organised in Johannesburg in the recent past. They identified the ways in which previous Pride events have reinforced racial, class, gender, and other social hierarchies – overlooking the problems confronting a vast majority of LGBTIAQ individuals and communities in and around Johannesburg and in South Africa as a whole and ignoring their daily struggles for adequate housing, safety, education, and access to public services such as transportation and health.

In a society still largely stratified along racial lines, this failure translated into Pride events that catered, often explicitly, to affluent, mostly white individuals. This deliberate de-politicisation of Pride and emphasis on festivities for the affluent is a slap in the face of individuals from economically marginalised communities, particluarly black lesbians and gender non-conforming people, whose lives are characterised by high levels of structural and interpersonal violence. In privileging corporate sponsorships and promoting the market value of such events, Pride ceased to be an inclusive space that was safe and accessible to all members of LGBTIAQ communities.

The meetings also generated a “Pride manifesto” that lays outs the principles and vision for a “People’s Pride,” including anti-racism, anti-capitalism, anti-sexism, anti-ableism, and the positioning of LGBTIAQ struggles within broader socio-political and economic contexts and struggles in South Africa, and globally. The People’s Pride is envisioned as an inclusive and explicitly political movement for social justice.

The organising committee, which is mandated to organise Pride in line with the vision of the manifesto, is in the process of creating a People’s Pride calendar; the events and actions will serve to:

•Build solidarity with other politically oriented Prides in the greater Johannesburg region and beyond, such as Soweto Pride and Ekurhuleni Pride;
•Educate and conscientise communities about the struggles that shape a range of experiences of being queer in South Africa;
•Honour the contributions and resilience of queer Africans;
•Celebrate the hard-won legislative freedoms we have today, recognising that none of us are free until all of us are substantively free; and
•Articulate demands for furthering social justice for all.
The organising committee meetings are open to all and hosted by Constitution Hill. In addition, mass meetings will be held regularly to ensure transparency and accountability.

What will be interesting about this push for a new and politicized Pride seems yet to be addressed and that is how it will be funded. That has always been the challenge for Prides, worldwide, often resulting in the capitalization of Pride events, which ultimately results in a recoil from the political issues and initial intentions, as corporate sponsors, much needed on the one hand, tend to steer clear of events that are “too political.”

The organizers, nonetheless are to be commended in their attempts and one can only hope that this time around individual egos steer clear. Lets hope for a true rainbow event where all are indeed included be it the “white,” the  “affluent,” the “marginalized,” in a forever dreamy attempt to keep race and class unified in the “new” and dare I say it, “struggling” South Africa. 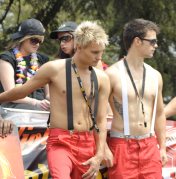 Of further Interest – My Notes:

Updated: answers from one of the new organizers, Sekoetlane Phamodi :

“My involvement in this new Pride movement came out of my disillusionment with the direction the now dissolved Pride Board and those that came before it in the recent past had taken Jo’burg Pride. I came into this process with the hope of shaping a new, people’s Pride which reflected and spoke to my own lived experiences being Black, being working class, being committed to social justice and being queer.”

I invite and am looking forward to comments on these questions. Thanks! 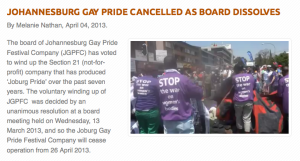 By Melanie Nathan, April 04, 2013. The board of Johannesburg Gay Pride Festival Company (JGPFC) has voted to wind up the Section 21 (not-for-profit­) company that has produced ‘Joburg Pride’ over the past seven years. The voluntary winding up of JGPFC  was decided by an unanimous resolution at a board meeting held on Wednesday, 13 […]

by Melanie Nathan, Oct 07. 2012. South African lesbian feminists called for a pause, a minute of silence at the Johannesburg  (Joburg) Gay Pride Parade, to remember lesbians and LGBTI victims of homophobic murders,  yet were denied their moment by Pride organizers. A group calling themselves One in Nine chanted “one minute of silence” and […]

Statement Written by GAP – Oct 11, 2012 On Saturday 6 October 2012 at the annual Johannesburg Pride march, the 1in9 campaign staged a now nationally infamous ‘disruption’ of the Pride ‘march’. LGBTi activists, many of them black lesbians, attempted to stop the march by blocking Jan Smuts Avenue near Rosebank, Johannesburg. The activists staged […]

2 thoughts on “Can there be a new politicized Johannesburg Pride”