Lying to fund raise – how low can you go Janet Porter? 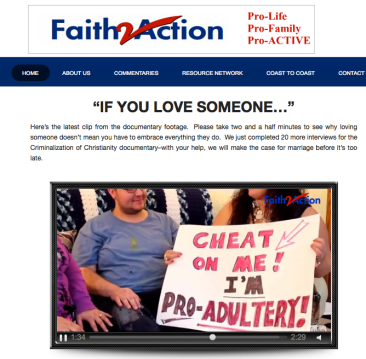 Watch this video by Faith 2 Action – one of the anti-gay groups at war with the idea of equality.  In their desperate cling to bigoted ideology and a lost battle, they try and raise money for a documentary – “before its too late” – to kill marriage equality.  Are we surprised that they would stoop so low? No – as desperation is as desperation does –

“Faith2Action is the pro-active launching pad for the pro-family movement.   Whether you search by issue or by state, Faith2Action provides the largest network of pro-family organizations in which to enlist.

It’s not about the uniforms we wear, or the branch of the cultural war in which we’re called, it’s about combining our strengths and winning on the issues that matter most.   Faith2Action is about being faithful where the battle is the hottest–where our Bible-based beliefs and freedoms are most at risk.  But beyond defending the issues that are most under attack, Faith2Action is about advancing–taking back ground.  Our goal isn’t to just survive the cultural war, but to win it.

Faith2Action provides pro-active, strategic, and unified ways to ADVANCE the cause of Christ and the kingdom of God.  We are turning people of faith into people of action to WIN the cultural war together for life, liberty, and the family.  Janet (Folger) Porter“

What is so amusing is not only the bland ignorance, the desperation and the usual attempt to spur myth as truth, but also their casting. When I first watched the characters as the video unfolded, I thought “Oh not another ex-gay” HA! I hate to be…errr.. stereotyping – sometimes one has to fight fire with fire – the “star” of the video perhaps should be coming out as “gay” – what can I say – his outward vibe- is he for real? Oh lest we suggest he is a poor self loathing human!

By Melanie Nathan, nathan@privatecourts.com
If you feel inclined to donate money to a worthy documentary that is FOR EQUALITY – check out the documentary that I am co-producing – GAY USA THE MOVIE at www.gayusathemovie.com