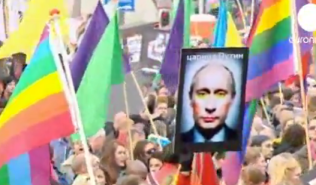 Further to our report about the lowering of rainbow flags to half mast in the Netherlands and protests against Russian PM Vladimir Putin, on April 08, the Dutch LGBT community and allies turned out by the thousands to protest Putin’s proposed anti-gay propaganda law in Russia.

On stage performers presented protest songs and more at the Amsterdam Protest Rally.