172 events start in all 50 states, with all eyes on Washington, D.C., as people start record breaking queue outside SCOTUS 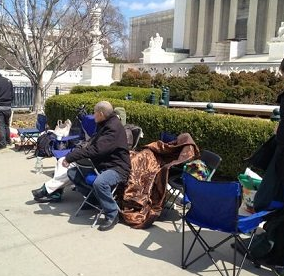 3/25 UPDATE:  over 2500 people have gathered at events ranging from Casper, Wyoming, to Tuscaloosa, Alabama, to Cleveland, Ohio already.  And tonight is the big “night before”…

The events in support of marriage equality, scheduled to coincide with this weeks arguments at the United States Supreme Court in the DOMA and Prop8 are underway … See images from Columbus and Cleveland Ohio, North Carolina, New York City, and many more.

At the same time people are already lining up outside SCOTUS, (The Supreme Court of The United States) to try and get inside to witness the historic arguments in the case arguments set for Tuesday March 26th:

– People wishing to be present for next week’s Supreme Court hearings on same-sex marriage have begun lining up outside SCOTUS to guarantee their place in the audience, facing four nights in freezing conditions and potential snow.

– While it is not unusual for people to line up overnight to be present for landmark Supreme Court cases such as last year’s Health Care Reform hearings, queuing for four nights in harsh weather conditions is exceptional.

– Around a dozen people, one of whom even arrived as early as Thursday afternoon, (that is six days ahead) have started a queue to hear Tuesday’s arguments on Proposition 8 and Wednesday’s on the Defense of Marriage Act, both of which prohibit same-sex marriage.

The U.S. Supreme Court will consider two cases about the freedom to marry. These two cases – which concern the discriminatory Defense of Marriage Act (DOMA) and California’s Proposition 8 – are fundamentally about whether gay and lesbian Americans can enjoy the same freedoms and opportunities as everyone else.

Momentum is on the side of equality and now the country is pouring onto the streets so the voice for freedom and equality can be heard by the nine justices who will decide the issue.

A bipartisan majority of Americans recognize that the ability to marry the person you love is a Constitutional right. But now is the time to stand up and show your support for marriage equality. Join us in Washington DC for a rally outside of the Supreme Court at 8:30am ET on March 26 and 27 – and our associated Interfaith Service and Passover Seder on 26th. Wear red to show your support for marriage equality!

If you can’t make it to DC, check out our map of events happening around the country and find the one in your community!

This is a historic moment in the equality movement, and we hope you can participate in an event to show your support. Let’s give people hope and create lasting change by using the voice of the people!