A couple of weeks ago I saw a post “Massachusetts Takes The Lead On Rights For Transgender Students“.  Being a MA native I smiled and perused probably while mumbling “of course we take the lead.”  It seemed our Dept.of Education had issued new policy for protecting Gender Identity in public schools as was required by the Trans Civil Rights Bill that went into effect last July.  Shortly thereafter I saw posts about our #2 SPLC hate group, MassResistance, having their undies in a knot over ‘our lead’ and mumbled “of course they are,” but I didn’t take much notice hoping other rational folks would me join in ignoring.  But then some legislators joined in…

At the start of this year’s legislative session in Massachusetts, redistricting took affect, and so for me,  every legislator, both federal and state, changed, including the two statewide US Senators, with the very welcome loss of Senator Scott Brown – and a happy welcome to Senator Elizabeth Warren!  It has all changed now that Senator John Kerry has left to be Secretary of State and to add to my dismay, I am saddled with the awful State representative, Sheila Harrington (R).

Yes, Harrington – makes me cringe.  She was already cringe-worthy having watched her testimony against the Trans Civil Right Bill some two years ago at the Statehouse.  Her live streamed comment to Gunner Scott, then Director of the Massachusetts Transgender Political Coalition, stating that transgender people change their gender identity on a daily basis got her national coverage.

HARRINGTON: “I’m not sure if this means that on a day-to-day basis you could be appearing as a woman or appearing as a man, but in your own identity and your own feeling of self you would be the other gender….”

Unfortunately it appears that YouTube has now taken down the video of that performance.  Too bad.  It also seems that in all the time that has passed she has neither educated herself nor ‘evolved’ one bit and is doubling down on her ignorance toward her transgender constituents and fellow citizens. She is speaking out against the policy set by the Department of Elementary and Secondary Education last week, in response to laws changed by that Trans Civil Rights Bill, which provides guidance to schools on all things relating to Gender Identity, including, among other things, allowing transgender public-school students to choose which gender bathrooms and locker rooms to use. 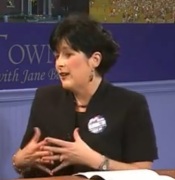 But really what’s going on with Rep Harrington and the gaggle of legislators that got public accommodations stripped from the Trans Civil Rights Bill – which they disgustingly and disrespectfully refer to as ‘The Bathroom Bill” – that passed last year is that they are just peeved feeling that the schools are overstepping their bounds so are taking it out on the students.  Bullying, I think we call it. Because, oh my gosh, the Board of Education is protecting transgender public school students.  How dare they!

And what is it with these folks and bathrooms?   I think Wayne Besen said it best the other day when he posted to his Facebook wall:

“Are they so sexually dysfunctional and repressed that the moment they enter a locker room or use the facilities it becomes a prurient experience? Why can’t they grow up and use the bathroom in a mature fashion like the rest of us?”

And no one seems to be missing that analysis either as national blogs covering the story currently have titles like “Massachusetts Lawmakers Retaliate Against Youth With ‘Transgender Issues’”.

Joining the fray is, as mentioned, SPLC-designated Hate Group MassResistance.  Brian Camenker’s latest blog piece starts out “First, there is an acceptance of “transgenderism” as a reality — an absurd starting point.” Then goes on to say “(Normal Americans just don’t buy into these concepts!)”

Probably don’t need to read further to catch his thoughts on the new policy.  I’m reminded of that ‘WHY BE NORMAL’ sticker I used to have on an old laptop and smile.  Brian claimed he ‘got their attention” but the photo from his website (above left) suggests really he confused half and put the rest to sleep!

It seems that MassResistance, the Massachusetts Family Institute, and this group of legislators should actually read the directives.  The ‘because’ clause and hence the very justification for this, applies to them:

“These students, because of widespread misunderstanding and lack of knowledge about their lives, are at a higher risk for peer ostracism, victimization, and bullying”

Last week, I was at the Statehouse for the MA Coalition for the Homeless’ Lobby Day.  During the afternoon ‘Youth on the Hill” session one of the homeless youth who spoke was transgender and told all how the school he went to made him use a porta-potty OUTSIDE.

So, yes guidance is needed clearly!

The Trans Civil Rights Law sections that apply to students set out “to establish that no person shall be excluded from or discriminated against in admission to a public school of any town, or in obtaining the advantages, privileges and courses of study of such public school on account of gender identity, among other characteristics” and “require schools to establish policies and procedures, provide training, and implement and monitor practices to ensure that obstacles to equal access to school programs are removed for all students, including transgender and gender nonconforming students.”

The MA Executive Office of Elementary and Secondary Education is tasked with providing a safe and supportive school environment for students whose rights are protected under the law.  I commend them for their efforts!

The hate machine on the right is now calling on its supporters to mobilize against the Massachusetts Education Commissioner Mitchell Chester.  Why don’t we do the same? Please send him thanks!

Comments can be submitted here: http://www.doe.mass.edu/contact/qanda.aspx?orgcode=COM_COM09