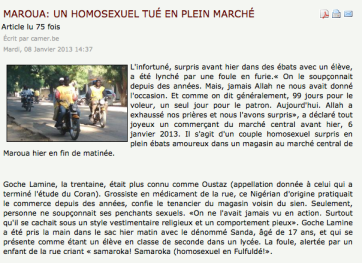 Today, an angry mob  reportedly lynched a man after he was caught having sex with a younger man and they stoned him on the spot, to death. The murder occurred at central market Maroua, Cameroon.  The report at  CAM News 24 describes the  men as a couple.

Lamine Goche, in his thirties, was known as Oustaz ( a name given to one who has completed the study of the Koran.)  Goche was apparently  a drug merchant who, according to neighbors, had worked there for over six years during which time:

One merchant said of Lamine Goche’s sexual orientation: “We suspected for years. But Allah did not give us an opportunity to act. … Today Allah answered our prayers and we surprised him. We had never seen him in action. Especially he was hiding under a religious dress code and pious behavior . ”

It is reported that Lamine Goche  was caught having sex with a ‘Sanda,’ aged 17, who presented himself as a student in school.

The crowd was alerted by a street kid shouting “Samaroka! Samaroka (the word for homosexual in the Fulfulde language).

His body was abandoned by the local Muslim traders, and it was left there to be buried by Christians who would likely collect the body instead.

The 17-year-old was reportedly taken to the district chief and his fate is till being decided.

We will keep out eye out for more reports on this.

We have not independently verified these reports.

3 thoughts on “Cameroon Man Murdered by Mob for Gay Sex”