Pepe Onziema Said  “I came to Springfield to face the devil.” (Meaning in the form of Scott Lively)

Today a large crowd of U.S. LGBTQI activists, holding signs outside the Hampden Federal Courthouse, Massachusetts, braved the early morning cold, to support Uganda’s LGBTI community in the first case of its type on U.S. soil, where opening arguments commenced today in a Motion for Dismissal, by Pastor Scott Lively.

Uganda’s lesbian, gay, bisexual, transgender and intersex community of Uganda, under the umbrella organization Sexual Minorities of Uganda (SMUG), represented by The Center for Constitutional Rights (CCR), are suing anti-gay Pastor Scott Lively, from Abiding Truth Ministries, in a case charging that he had committed crimes against humanity.

The lawsuit has been brought under the Alien Tort Act, which allows foreigners to sue in American courts in situations alleging the violation of international law. The suit claims that Lively’s actions resulted in the persecution, arrest, torture and murder of homosexuals in Uganda.

The activists from several U.S. organizations joined six of the Ugandan Plaintiff members of SMUG who arrived from Uganda especially to attend the hearing, where Lively is requesting, for the second time, that the case against him be dismissed by the Court.

The case against Lively asserts that he went beyond hate-mongering and that he actually actively pursued a strategy together with influential co-conspirators, including pastors and parliamentarians in Uganda, to “criminalize advocacy,” by conspiring to violate LGBTI Ugandan’s rights to free speech, assembly and the freedom of association by LGBTI groups.

After hearing argument by both sides today, the Judge reserved his decision. A further and more detailed report shall follow this report. In the meantime the Judge has reserved Judgment for a later date as to whether or not the case will be dismissed or proceed to trial.

Pepe when speaking to the crowd answered the question why he chose to come to Springfield, MA: “I came to face the devil.” (Meaning Scott Lively who had so dramatically impacted his life.)

“Coming face to face with the man who has caused us so much pain is important to me. We want him held accountable for the escalating homophobia and persecution in Uganda. This case is about making it clear to people who have exported their hate agenda to Uganda that their actions have a very real effect on us and they must stop.” Said Pepe. 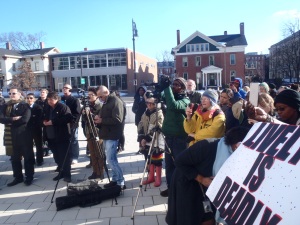 At a Press Congference and rally held after the hearing Kristofferson made the following speech:-

I want to thank The Center for Constitutional Rights for bringing this ‘Crimes Against Humanity’ lawsuit against Scott Lively. I want to thank the human rights defenders of Sexual Minorities Uganda (SMUG)  for their courage to bring this lawsuit, and I want to thank all of you who have come here today in support of this.

Whether it is here in Springfield MA, or Uganda, or Moldova, or Springfield Missouri, conspiring to persecute the gay and trans communities, denying us our full and equal human rights is wrong.   We are here today to hold those whose actions conspire to persecute and deny us our rights, accountable.

No one will ever deny Scott Lively his First Amendment right to free speech, nor his freedom to practice his religion.  However when he puts his speech and religion into actions that discriminate, oppress and persecute it proves to have dire consequences, as it has done in Uganda.

What we have here today is the coming together of two continents. We are all here because we believe in the rights inherent in our respective Constitutions as well as the Human Rights declarations that govern this globe, the one which keeps Nations as friends.

Our US Constitution’s Equal Protection Clause of the 14th Amendment that says “no state shall … deny to any person … the equal protection of the laws”.  But these rights are being denied us because people like lively and his friends travel around collaborating with Government officials and religious leaders to oppress us.

The Ugandan Constitution guarantees Human Rights and Freedoms to all stating “All persons are equal before and under the law”, granting the rights of Equality and Freedom from discrimination, Respect for human dignity and protection from inhumane treatment, Right to privacy, and Freedom of assembly.  Denying LGBTI people these rights has become the willful target of the Kill The Gays Bill as a direct result of Scott Lively’s vicious actions.  And as bad as the impending Kill the Gays Bill is, its lobby impacts the day to day lives of those in Uganda who are currently being harassed and persecuted as a result of the hatred it has incited. 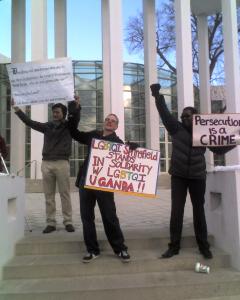 So whether it is a ‘nuclear bomb’ dropped in Uganda or a ‘Trojan Horse’ exposed in Missouri or rallying against ‘homo-fascists’ on Boston Common, Scott Lively’s own words and deeds do not hide from his intention which is to eradicate and cleanse the world of LGBTI people.   All persecution, producing such severe harm,  is unjust and those who incite it must be brought to justice.

Cathy Kristofferson is a queer rights activist living in central Massachusetts. She is a co-State Lead of GetEQUAL MA, a board member of Join The Impact MA, and member of the Stop The Hate and Homophobia Coalition Springfield. Cathy is also a member of the Homeless Youth Task Force of the MA Coalition for the Homeless, and is working with the LGBT Working Group of the Unaccompanied Homeless Youth Commission of the Executive Office of Health and Human Services of the Commonwealth of Massachusetts.

The lawsuit, brought by the advocacy group Sexual Minorities Uganda, alleges that Lively’s actions over the past decade, in collaboration with key Ugandan government officials and religious leaders, are responsible for depriving LGBTI people in Uganda of their fundamental human rights based solely on identity. This is the definition of persecution under international law and is deemed a crime against humanity. U.S. law allows foreign citizens to sue Americans for crimes against humanity under the Alien Tort Statute (ATS). The Center for Constitutional Rights (CCR) filed the suit, the first such case brought to protect the rights of LGBTI people, on behalf Sexual Minorities Uganda.
“Coming face to face with the man who has caused us so much pain is important to me. We want him held accountable for the escalating homophobia and persecution in Uganda. This case is about making it clear to people who have exported their hate agenda to Uganda that their actions have a very real effect on us and they must stop,” said Pepe Julian Onziema, the Advocacy and Policy Officer at Sexual Minorities Uganda. READ MORE http://www.ccrjustice.org/newsroom/press-releases/federal-court-hears-persecution-case-against-anti-gay-leader-scott-lively

In this picture is Ugandan LGBTI activist Pepe Onziema, from SMUG.