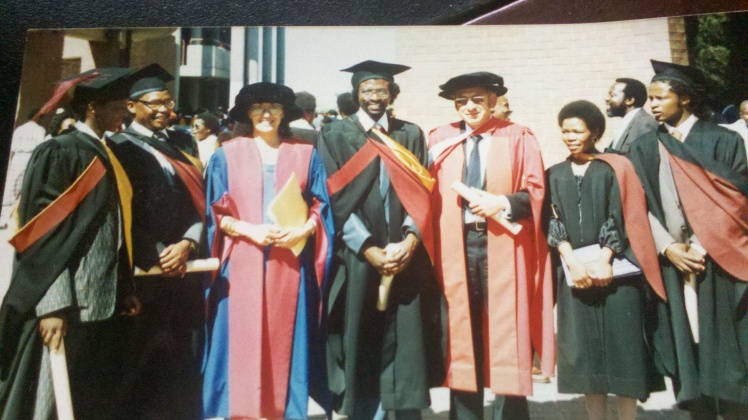 Carmen Nathan, executive editor of Medicine and Law Since 1989, suddenly died  in Mmbatho, Bophuthstwana on October 09, 1990. Her death was a severe loss to the editorial baord and left a great void in the lives of her family and her many friends and colleagues in Southern Africa, Europe, England, Israel North America and elsewhere in the world.

Her career as an academic commenced when she was appointed a lecturer in the university of South Africa in 1971. Three years later she became a senior lecturer in the University of the Witwatersrand in Johannesburg and 1982 she was offered a chair in the University of Bophuthatswana (UNIBO) .  She was appointed deputy dean of the Faculty of Law and head of the department of private law. As a professor she distinguished herself  and served as Dean of Law from 1984 to 1978.

She played a leading role in establishing the International Center for Medicine and Law at Unibo and served as its first chairperson. initially in a part-time capacity and since 1989, full time. She joined the editorial board of medicine and Law in 1985.

Professor Nathan’s main fields of academic interests were family Law, Indigenous Law and Medical law. She wrote a book on Family Law and was co-author of several other text books. She published many articles ina  number of law journals. She was frequently invited to participate in television debates and radio programmes concerning a variety of legal issues. Over the years she attended many local and international conferences on particularly women’s rights and medical law.

Over many years Carmen Nathan was in the forefront of the women’s rights movement in Southern Africa.  An ardent campaigner for human rights, she took the lead in roganizing two highly successful conferences on Medicine and Law and Human Rights under the auspices of the Unibo International Centre of Medicine and Law.

Professor Nathan rendered outstanding services to the (then) State of Bophuthatswana which she made her home since 1982.  In 1987 she was awarded the prestigious Order of the Leopard. Her counsel was sought by many, including President Lucas Mangope and members of his cabinet.    She played a leading role in the consumer protection movement and was acting Director of The Bophuthatswana Consumer Council since  1988.

As chairperson of the Mmbana Foundation since 1986, which established the impressive Mmbana Cultural Centre in Mmbatho, she was actively involved in promoting culture, particularly amongst the young Tswana people.

She was a member of  a number of national and international bodies and served on many committees and boards. Her friends and colleagues often marveled at the amount of energy she devoted to societal affairs and her positive input at so many different levels.

Carmen Nathan will be remembered as a loving mother, a brilliant lawyer and an academic who contributed much to legal thought in Southern Africa in particular, and an idealistic and tireless worker who devoted a large part of her life to the under-privileged members of her community.

The editorial board of Medicine and Law gratefully records its deep appreciation for the outstanding services rendered by Carmen Nathan to the journal during her life.