“It is a bizarre resolution and it will never pass” 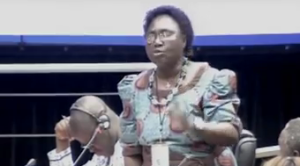 At The Pan African Parliament‘s  session  in Johannesburg on 9 October, Ugandan delegate, Ogwal Cecilia Barbara faced the fact that her anti-gay resolution was not only without merit, but also an embarrassment to her country.

Barbara tried to introduce  a  resolution (see her fervor in video below)  to  prohibit and punish homosexuality for the entire Continent of Africa and she had the audacity to do so on the hallowed Mandela soil, where the promise was made to South Africans that never again would a minority’s inherent civil and  human rights to equality be compromised through discrimination. Post apartheid South Africa is the one country in Africa where the LGBTI community is protected by an all inclusive Constitution that guarantees protection and equality based on sexual orientation and gender identity.

In a statement reflecting draconian ignorance Barbara claimed ” Africa must stand up. We must pass a resolution condemning homosexuality because it is not an African culture.We are not allowed to practice polygamy in other countries, why should we be forced to do what is not natural?”

Although 25 nations in Africa declare homosexuality illegal, the push by the international community is for the decriminalization of homosexuality based on the very basic human right to one’s natural sexual orientation.  While many hide behind the newly conceived excuse and pretense that “homosexuality is Unafrican,” others seek to educate, noting that sexuality has its natural spectrum and is not contrived.

Thami Dickson reports on the PAP Session as follows:

Same sex relations are illegal in Uganda. Homosexuals are often subjected to violence and social rejection. Today Ugandan lawmakers tried to go a step further, hoping to get the continent’s support for life imprisonment for homosexuals.

The proposal was rejected, with some members saying it’s a blot on Uganda’s remarkable emergence from civil war. South African parliamentary member Santosh Vanita Kalyan says the resolution that Uganda is calling for, is “bizarre.”

Kalian went further to say: “It will never pass in this parliament, especially from members like us who feel that the rights of all should be respected.”

Also making their point across, Namibian member of parliament Peter Katjavivi said: “If that is acceptable to a particular member state, let it be.” But Katjavivi was quick to point out that such a resolution “should never be made a continental-wide affair. We should respect laws as they affect individual countries”, he went on to say.

Homosexuality is still a controversial issue on the continent with some labeling it “unAfrican”. Malawian president Joyce Banda earlier promised to repeal anti-gay laws in her country, but later backtracked, arguing that Malawians were not ready to deal with homosexuality.”

In the same way as the Ugandans do not like external interference in their politics, they should keep their bigotry out of the rest of Africa.  South African LGBTI leadership should come out now with a strong statement to condemn this type of rhetoric on South African soil as being unAfrican! If anything what South Africans have learned is that a society that is all inclusive is the society that reflects the new Africa,. Uganda may choose to live in dictatorship and dark ages, while  South African LGBTI are only just beginning to take the helm of their rights.  Perhaps Ms. Barbara can sense that the sphere of progressive influence and the recent defeat of the Traditionalists in their attempts to negate equality in South Africa, is about to spread North.

Note recently in SA, The Gay Flag of South Africa was made a National symbol and LGBTI leadership have asserted it will be carried as a symbol for all of Africa, to impact the decriminalization continent wide.

I would love to see the Gay Flag of South Africa (on the right) invited to next years Uganda Pride ( 2nd photo on the right)!