Watch Video where 47% of America receives its Romney diss! 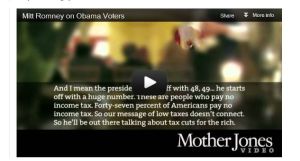 Thinking the cameras were off, Mitt Romney made a remark that ought to lose him the presidency. Not to mention all the other reasons why he should not be president:

Here is the ultimate FU/ Diss:-

“There are 47 percent of the people who will vote for the President no matter what. All right, there are 47 percent who are with him, who are dependent upon government, who believe that they are victims, who believe the government has a responsibility to care for them, who believe that they are entitled to health care, to food, to housing, to you-name-it. That that’s an entitlement. And the government should give it to them. And they will vote for this president no matter what…These are people who pay no income tax… My job is not to worry about those people. I’ll never convince them they should take personal responsibility and care for their lives.”

“Mitt Romney’s string of self-inflicted setbacks has dragged on so long that it’s becoming hard to remember when he actually had a great week on the campaign trail.” “The only way Romney can win,” a pained Republican strategist suggested, “is to have his mouth wired shut.”

Romney sees the country as pretty divided too and, furthermore, that for him the important divisions are not between the Dems and the Republicans but between “the makers and the takers” as David Brooks commented in his column this morning at the New York Times.

“With Mitt Romney defending his attack on 47 percenters, it seems like as good a time as any to mention that we still haven’t seen Mitt Romney’s 2009 tax return. After all, of the 400 wealthiest American taxpayers in 2009, six paid no income tax whatsoever. And in 2011, about 7,000 taxpayers with income over $1 million paid no income taxes. So despite his claims otherwise, there’s a non-zero chance that Mitt Romney’s federal income tax in 2009 was in fact zero. If that were in fact the case, wouldn’t it be quite the irony? Odds are, we’ll never know. But I sure am curious.”

“Over the years, lawmakers have increased the number of non-payers by enacting reams of tax breaks — such as tax credits for work, kids and education.The Bush tax cuts, first passed more than a decade ago, expanded many of them. Indeed, if the Bush tax cuts are allowed to expire the number of non-payers could drop significantly, according to Roberton Williams, a senior fellow at the Tax Policy Center.”

This GOP meme—which Romney has yet to endorse publicly, but seems to be endorsing here—is, among other things, a betrayal of a conservative invention: the Earned Income Tax Credit. The EITC was created by Sen. Russell Long D., La. (who in spite of being Huey Long’s son was pretty conservative); greatly expanded under Ronald Reagan; and then expanded yet again under Bill Clinton. The idea was that you should reward the “deserving” working poor, as opposed to the un-deserving poor on welfare. But after Clinton ended “welfare as we know it” in 1996 it got harder to scapegoat welfare recipients. So conservatives decided, what the hell, there are no deserving poor. As Romney says in the video above, poor folks who pay no taxes (on income earned from—remember—working!) don’t “take personal responsibility and care for their lives.” Shame on him.