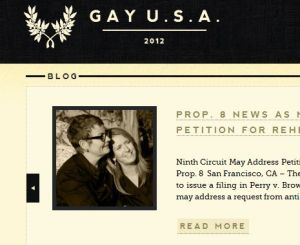 San Francisco, CA – Today, the United States Court of Appeals for the Ninth Circuit denied a request from anti-marriage forces to reconsider its landmark ruling in Perry v. Brown that found California’s Proposition 8 unconstitutional.  Proposition 8 stripped gay and lesbian Californians of the fundamental freedom to marry.

“Today’s order is yet another federal court victory for loving, committed gay and lesbian couples in California and around the nation,” said AFER co-founder Chad Griffin.

“The final chapter of the Proposition 8 case has now begun.  Should the United States Supreme Court decide to review the Ninth Circuit’s decision in our case, I am confident that the Justices will stand on the side of fairness and equality.”

On February 7, 2012, a three-judge panel of the Ninth Circuit concluded that Proposition 8 violates the Equal Protection Clause of the Fourteenth Amendment to the United States Constitution.  The Ninth Circuit panel majority held:

“Proposition 8 serves no purpose, and has no effect, other than to lessen the status and human dignity of gays and lesbians in California, and to officially reclassify their relationships and families as inferior to those of opposite-sex couples.  The Constitution simply does not allow for laws of this sort.”

The request for a larger eleven-judge panel of the Ninth Circuit to reconsider the case, known as rehearing en banc, is only granted upon a majority vote of the Ninth Circuit’s 25 judges in regular active service at the time Proponents’ petition was filed. There was no such majority vote today and so the decision stands unless it is taken up by The Supreme Court of the United States, which may do so in its discretion. If it does not take up the case, then California same-sex marriage is back in business as rights are restored,

The Ninth Circuit also rejected Proponents’ renewed attempt to impugn the reputation of the United States District Chief Judge who struck down Proposition 8.  Unable to defend Proposition 8 on its merits, Proponents claim that the now-retired Chief Judge Vaughn R. Walker was disqualified from ruling on Proposition 8 and that his historic decision should be vacated because he is gay and in a committed relationship.  The Ninth Circuit unanimously rejected Proponents’ offensive argument, stating: “To do otherwise would demonstrate a lack of respect for the integrity of our federal courts.”

“The momentum for the freedom to marry seems unstoppable,” said Stuart Gaffney, Marriage Equality USA’s Media Director. “Three weeks ago, the President of the United States announced his support for marriage equality. Last week, the 1st Circuit Federal Court of Appeals held that the so-called Defense of Marriage Act is unconstitutional. And today, the 9th Circuit Federal Court of Appeals upheld its earlier decision striking down Proposition 8. Nationwide polls have shown majority support for the freedom to marry for the last two years, and Californians now favor marriage equality by a 59 – 34 percent margin, according to the latest polling,” said Gaffney.

“Earlier this year, a 3-judge panel of the Ninth Circuit held that Proposition 8’s targeting lesbian and gay people and taking away their freedom to marry violated the equality and fairness guarantees of the United States Constitution. Today, a majority of the Court agreed, by declining to revisit the ruling. If the United States Supreme Court also declines to review the case, loving, committed lesbian and gay couples could be able to marry again in California later this year or early next year,” said John Lewis, Marriage Equality USA’s Legal Director.

Thom Watson and Jeff Tabaco of Daly City have been waiting to marry since Prop 8 was passed almost 4 years ago. “This month Jeff and I begin our 10th year together as a couple,” noted Watson. “When Judge Vaughn Walker heard closing arguments two years ago this month, he quipped, ‘June is, after all, the month for weddings,’” stated Tabaco. “It would be wonderful if this June marked the final decision in the case, and Thom and I could celebrate our 10th anniversary by getting legally married,” he continued. “A few days ago First Lady Michelle Obama stated: ‘In a country where we teach our children that everyone is equal under the law, discriminating against same-sex couples just isn’t right.’ We applaud our courts’ standing up for what’s fair and right and urge them to continue to do so,” concluded Watson.

In the meantime the stay preventing California same-sex marriages remains in place.

In the meantime the stay preventing California same-sex marriages remains in place.