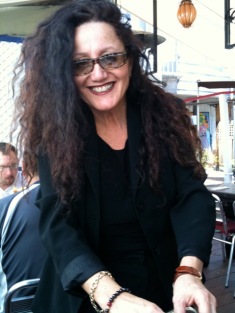 It was difficult for me to read Dustin Lance Black’s outlandish article on the Hollywood Reporter.  I found it to be irresponsible, unsophisticated  and quite poorly written. I sent my detailed response to the piece to  both ‘The Advocate’ and ‘LGBTQ Nation’ which are publications I have written several OP-EDS for in the past. So far LGBTQ Nation has published the Article which I am cross-posting below:-

While one cannot disregard the work of the screenwriter turned activist and its impetus on marriage equality, his latest critique of President Obama, and worse yet its luminous abode engorges like an unwelcome cloud on a sunny day. As an activist in the community, I want to clearly disassociate myself from the ominous loom of Black’s threatening blur.

In his article, Black attempts to connect President Obama’s record on LGBT issues to the non-record and vacillation, not to mention the irrelevance at this time, of Mitt Romney. Black says “both candidates are “up in the air” on the equal rights issue.” This trite and ill timed analogy is not only inaccurate but an insult.

Black throws a crumb or two with his cryptic mention of the Department of Justice and the repeal of “Don’t Ask Don’t Tell,” yet his stance fails to elucidate on so much more that indicates Obama’s attitude towards LGBTI rights, both here in the USA and internationally.

When, in the article, Black throws a reckless “but after all the hope and change LGBT people were promised four years ago, many are frustrated with Obama’s sluggish, self-described “evolution” on the issue of marriage equality,” I hear words out of context and in shallow meaningless void, words that indicate a misunderstanding of the milieu and politics.

Black is absolutely incorrect in his assertion that President Obama has yet to “evolve” on the issue of marriage equality, as he buys into the rhetoric that died when the Respect for Marriage Act was introduced last year by Senator Feinstein, as repeal legislation for the Defense of Marriage Act (DOMA). Soon thereafter, Obama indicated he would sign the legislation into law.

Notably, The Washington Post headline read, “Obama backs bill to repeal Defense of Marriage Act” — how much more evolving could one do than that?

Accordingly, President Obama believes in marriage equality, yet may not have mouthed the words, perhaps out of political expediency; the latter difficult to fault given the nature of his opposition. The so called evolution of Obama has already happened and the term now serves only as justification for a tantrum. The entire premise of the Dustin Lance Black article is null and void!

What we as the marginalized gay, lesbian, bisexual, transgender and intersex community realize is that there is only one option available to us for this election and therein is our focus.

I asked activist Kristina Lapinksi what she thought about Black’s threat to pull his support for Obama when he said “If his evolution continues to fall short, then those interested in equality in this country must abandon their support.” Her comment brought this back to the bottom line, “What an irresponsible thing for DLB to say before elections — who is the pro-equality alternative, Karger?”

The Oscar winner takes advantage of his clout on the Reporter pages, a publication that reaches so many, and as he continues to milk his notions whilst pandering to the likes of Chris Wallace on his Facebook page.

For a gay man to threaten withdrawal of support for Barack Obama’s second term in a publication that serves his industry, one where allies are sought on so many levels, is reckless. Any sidetracking serves no good at all with threats wasted breathe for a person of Dustin Lance Black’s stature.

Black has caused more harm than good with this piece. Instead of standing tall with the President he has used his celebrity to undermine equality by validating and further assisting in the alienation of many who do not understand what is at stake.

If we do not fully support the President, what is at stake is a rollback of DADT, a President who will veto the DOMA repeal legislation, a DOJ which will defend unconstitutional laws, judges who will kill marriage equality, bi-nationals who will be deported in droves and so much more.

The time to take the President to task has come and gone. At present, the focus ought to be entirely on the Obama re-election and our support should be unrelenting. Once in office, we can have our day — and that will involve a lot more than pure reliance on the one office.

Black says, “So until the president publicly puts his wheels down on the side of full equality, he must be passionately engaged, confronted and protested for maintaining his prejudiced, hurtful public position.”

This comment is way out of time. The time for criticizing the President to this degree of chastisement was way back in 2010 during the lame duck session when the Democrats had a majority in both the Senate and House. Then the President should have placed LGBT interests at the fore, yet even then the blame must be distributed amongst our Democratic representatives, our own LGBT advocacy groups and grassroots alike.

Winning equality is a complex combination and cannot be attributed to one man and one office.

Let us face the paradox here, while at some point in time we have collectively failed the ultimate attainment of equality, we are still on the path and we still have hope. The sooner we realize that our only hope in present time is President Barack Obama and the sooner we laud the greatest record of equality to date being notched to this President, the more likely we are to achieve our goals.

This administration more than ever before has taken leaps toward equality, on so many levels. This is not the time to chastise or threaten President Obama or any Democrat; it is political suicide to alienate even one single voter and judging by the comments on the Reporter site Black has had his way.

Black spends paragraphs on inane comparative, comparing Obama to GOP Gov. Chris Christie, and pulling the dispelled evolve speechifying theme as he asserts that Obama “is behind Laura Bush, Dick Cheney and Cindy McCain,” in his so called evolution. How does Black measure Obama’s record against the commentary of the likes of Laura, Dick and Cindy, who have no political prowess or any election at stake?

Dustin Lance Black would serve our community more to tout our need for more progressives to be elected to Congress. After all we will only attain equality with a Democratic majority in Congress.

So when Black attempts an airplane analogy -“The problem is, when the president flies, he’s on Air Force One, a plane designed to refuel in the air. He can stay up there for as long as it serves him,” he fails to understand that pilots often circle in the air for the good of those on board as well as those on the ground.

In November, 2011, The Respect for Marriage Act passed the Senate Judiciary Committee with a vote of 10-8, all committee Democrats favoring appeal and all Republicans opposing, making a strong political statement that Democrats support marriage equality.

The repeal bill would need 60 votes in the 100-member Senate, and sponsors acknowledged the votes are not there. The measure would have no chance in the House, controlled by conservative Republicans. Do you still blame Obama’s purported evolution?

The mere fact that President Obama has said he will sign the repeal of DOMA serves us all; and what he says or does until we have a cooperative and viable Congress is meaningless to equality. Now we must plan for his reelection and a Congress that will deliver marriage equality to his desk. It will be then that the plane, despite some blurry clouds, will land safely – not before!

Melanie Nathan – Your piece on Hollywood Reporter prompted me to write this. It made me really angry. This is not the time for that kind of threat. It is irresponsible and not properly thought out. I guess my question to you is did you know that Obama has agreed to support the Respect for Marriage Act? If so why did you not include that in your piece ?

Melanie Nathan’s view of the CRITICAL CHANGES THAT MUST OCCUR DURING THE NEXT OBAMA TERM – which will depend entirely upon three major factors –
Control of the House,
Majority in Senate,
Aggressive campaigns by LGBT Advocacy groups,
Grassroots awakening, and perhaps our ONLY hope for some of it
SCOTUS!