No genocide in Iraq, Never Again! The World must scream – Americans have a great responsibility
By Melanie Nathan, 03/12/2012 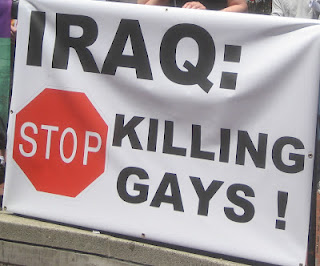 Up to a 100 gay and ‘Emo’ youth have been massacred in Iraq, some reports indicate it has been ordered and supported by police and state officials.”  The Government itself seems complicit and that has added to the great shock of the reports, which seem to have been verified by pictures now circulating of the events.  Please note that we have not been able to verify these reports ourselves and are relying on what we have heard via third parties.

Our voices must be heard and I hope, as one of the organizers, my friends and supporters join us in this imperative protest!

The demonstration has a main goal: Create photos and videos illustrating lesbian, gay, bisexual and transgender support for the besieged and fearful targeted communities in Iraq. Then use those images to show the world and our friends in Iraq that LGBT activists are not silent over the murders.

At Castro and 18th Streets, the crossroads of gay America, we will display our “IRAQ: STOP KILLING GAYS!” banner, and tape enlarged photos of the victims when they were still alive, after being murdered, along with news stories to the walls of the Bank of America. Candles will be lighted in remembrance of the dead and hope for an end to the killings.

No speeches are planned, but we will have a bull horn for anyone who wishes to speak out. For two hours on Wednesday, we are asking those walking past our vigil to take a few minutes and bear witness to the unconscionable deaths taking place in Iraq.

Our action is one part of the global response to the Iraqi situation – from pressuring governments and the United Nations to take action protecting the at-risk communities to using social networking to sustain visibility. We hope other street actions take place in coming days.

US Embassy Comments on Gay and Emo Killings in Iraq

Executive Committee Members
Gays Without Borders
San Francisco, CA,
Dear Executive Committee Members:
Thank you for your letter. This embassy shares your concern about the recent attacks in Iraq against individuals identified as gay or part of the “emo” culture.  When NGOs here in Iraq first brought this issue to our attention, we immediately expressed our concern to the Government of Iraq, urged immediate measures to combat this violence, and undertook to try to ascertain the details of these attacks.
Along with the Embassy, the U.S. Department of State strongly condemns the recent violence and killings in Iraq by groups who appear to be targeting individuals based on their sexual orientation, gender identity, or personal expression.  These acts of intolerance should have no place in any society.
We have been encouraged by the degree of prominent public condemnation of these attacks.  A representative for Grand Ayatollah Ali Al-Sistani condemned the violence and called the killings “terrorist attacks.”   The Chairperson of the Human Rights Committee within Iraq’s Parliament condemned these actions as well.   These statements indicate that an increasing number of Iraqi officials are ready to take these crimes seriously.  Through our advocacy and diplomatic efforts, we will continue to urge the Iraqi government to condemn attacks on the LGBT community and to devote all possible attention to preventing such crimes.
The State Department will continue to advance a comprehensive human rights agenda that includes the elimination of violence and discrimination based on sexual orientation and gender identity.
I appreciate your concern for the Iraqis who have suffered and who are at risk of suffering from this violence.  I assure you and the members of your organization that the Embassy is fully engaged at the highest levels to end these attacks, bring the perpetrators to justice, and ensure a secure and free future for all Iraqis.
Sincerely,
Michael McClellan | مايكل مكليلان
Spokesman/Deputy Public Affairs Officer | المتحدث الرسمي بإسم السفارة
Embassy of the United States of America | سفارة الولايات المتحدة الامريكية
Baghdad, Iraq | بغداد، العراق
E-mail: mcclellanmw[at]state[dot]gov

The vigil ‘is one part of the global response to the Iraqi situation – from pressuring governments and the United Nations to take action protecting the at-risk communities to using social networking to sustain visibility.’

Melanie Nathan, one of the organizers from San Francisco urges all to come down to the Castro to express their outrage.

She told Gay Star News: ‘We will not tolerate the ongoing persecution of our community in Iraq. Surely after Saddam Hussein, all Iraqi people have a right to expect that the genocide of any group is a thing of the past.

‘Wake up America, I thought there was at least some point to that awful war.’

Nathan hopes the Gays Without Borders protests will spread worldwide to help prevent more massacres, and also notes that if it rains the venue may change and so asks participants to keep an eye out for updates.

In addition the campaign received a letter of support from the US Embassy in Baghdad saying the ‘embassy shares your concern about the recent attacks in Iraq against individuals identified as gay or part of the “emo” culture.