As a country which stands out in the world, with an all inclusive Constitution, South Africa has every right to celebrate PRIDE PART 1 see part 2.
By Melanie Nathan, 03/03/2012 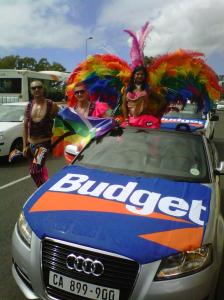 Cape Town Pride celebrates yet another year of PRIDE and colorful is an understatement when the Mother City’s LGBTQI population take over the streets. The Country, dubbed the Rainbow Nation, since the end of apartheid, truly embraces the term today as thousands turn out to celebrate.

Thanks to the Flag Boys,the designers and promoters of the South African Gay Flag we can expect fun filled pictures to come our way all weekend and I will keep posting them here on this site.

The SA bill of Rights ensures that there can be no discrimination against people based on sexual orientation and gender identity; yet the country must still address homophobia on many levels.

Marriage is equal for all in South Africa, including same-gender couples and different-gender couples.  Surely in the rest of Africa criminalization, the old colonial comport, should be put to rest?  If African countries  believe they want to shun their colonial ghosts, then surely they should want to shun the West’s more recent import “hate”?

Although South Africa is still rife with homophobia, based on old ideas, activists like Eugene Huge Brockman and Henry Bantjes, the SA Gay flag designers and promoters are changing hearts and minds as they prepare for their annual tour of South Africa, waving the flag with pride. The pictures depict the committed couple doing just that! Committed to each other, their country and their flag; Henry and Huge ensure a colorful presence at every Pride they attend.

This year in my PRIDE, and as an expat from South Africa, I was able to gift flags to happily accepting recipients who included amongst others:-

Fred Karger, Republican and fist Gay man to run for US President;

Chely Wright, first famed country singer to come out openly as a lesbian, Academy of Country Music (ACM) named her Top New Female Vocalist in 1995; and other

The SA Gay Flag serves as a flying ambassador for equality and goodwill, as photographs are taken of those celebrating equality and unity around the world. In the US alone, GAY USA the Movie, which is seeking to impact LGBT equality in the USA, took pictures were taken of US couples with the flag at New York’s historic opening day for Gay Marriage, and with Mr. Gay Seattle at the signing of the new legislation.

3 thoughts on “From Cape Town with Pride”